The Assembly Chamber of New York’s new capitol building was dedicated in 1879. Shortly thereafter, the elegantly vaulted ceiling began to crack.  Stone chips and dust sprinkled downward.  Engineer William H. Slingerland was hired to investigate the safety of the structure.  As early as 1881 he reported that it was unsound. It was not until 1888 that the stone was removed and a new coffered oak ceiling installed. That effort was soon mired in controversy as low-cost paper mâché was substituted for solid oak panels – a move that was not approved by the legislature.  During the epic 1911 Capitol fire, the paper mâché panels came in handy as they soaked up the water sprayed by firefighters slowing the progress of the flames.  Today, the oak ceiling remains in place.


Here are some links for more information on the New York State Capitol and the Assembly Chamber.


There was much newspaper coverage of the Assembly Ceiling Debacle.  Go to https://fultonhistory.com/Fulton.html and search on "Assembly Ceiling" for a wide assortment.  Many of them are very long and hard to cut and paste here.  Below are some snippets. 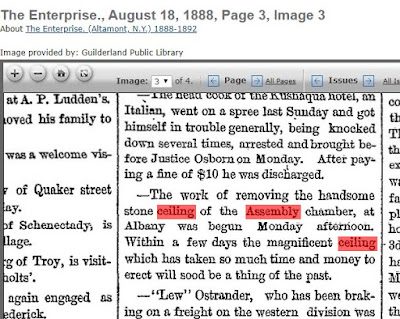 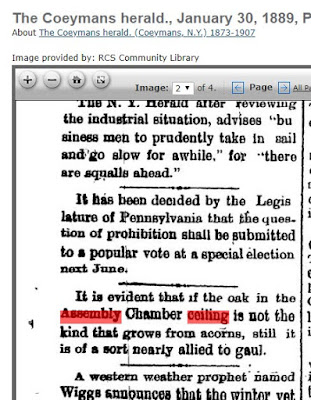 Also, check out this book.  It has a whole chapter called "The Case of the Unfortunate Ceiling." 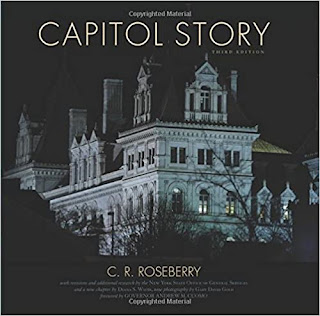 And of course, the website for the Slingerland Family Burial restoration project.
https://www.slingerlandvault.org/
Posted by Susan Leath at 7:23 AM