Our Towne Bethlehem May 2020: Journals and Diaries

I hope you are writing in a journal/diary and will share it with me one day!


On March 16, 1902 John R. Adams of Adamsville (aka Delmar) wrote in his journal “Sunday cloudy & rainy a sour disagreeable day. Russ & self cleaning up in onion cellar. put up a few things for market perhaps tomorrow. Louise @ church in a.m.” On that same day 118 years later, I started my own journal to record the historic moment we are currently experiencing with the advent of the Covid-19 virus. My first line is “So, I’m starting a plague journal.”

Daily writing in journals and diaries has a long history. One of my favorites from ancient history is that of Michitsuana no Haha. Written around 974, Kagero Nikki, The Gossamer Years, was composed by a woman only identified as the Mother of Michitsuana. She described her loneliness and joys while navigating the Japanese Heian court as a lowly second wife to Fujiwara no Kaneie. She expressed her observations and feelings through daily writing as well as memoir and poetry creating a classic of Japanese literature.
Here’s a snippet from her pilgrimage to Hasedera
“Starting out again at dawn, we reached the Uji estate about noon. It was very quiet, and the surface of the river sparkled pleasantly through the trees… after lunch, the carriage was loaded onto a ferry … the waterfowl moved me strangely. It was perhaps because I was traveling alone that I was so taken with everything along the way.”

The writer herself speculated that her writing would be as ephemeral as "the diary of a mayfly or the shimmering heat on a summer's day." And here we are 1000+ years later reading her words

Another favorite from more recent history is the writing of Charles Darwin.  Manuscripts, journals, diaries, letters, etc. are all available online at http://darwin-online.org.uk/.  In his journals, Darwin often focused on recording his observations of natural life.  I like this one from March 17, 1826. "Found a star fish spawning also found an animal nearly three feet long, of a green coulour with numerous feet on ton each side."

For a much more local view, in the collection of the Bethlehem Historical Association is a small, black diary, no bigger than 2 inches by 3 inches. Each page has two sections filled with the childish scrawl of Andrew Ten Eyck. For example, on March 16, 1898 “a lot of rams went down on the train today.” There are many entries along the lines of “went to school today” and “went to church today.” Most fascinating are the entries that begin “the united states talk of war.” The one from Saturday, March 12, 1898 is particularly intriguing: “the united states talk war” then the words “50000 million” then words I can’t read. It turns out that in the spring of 1898, the United States was ramping up towards the Spanish American War and on March 9 had allocated fifty million dollars to build military strength. That must be what Ten Eyck is writing about. 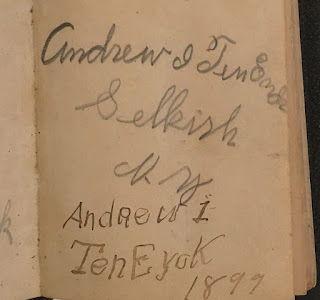 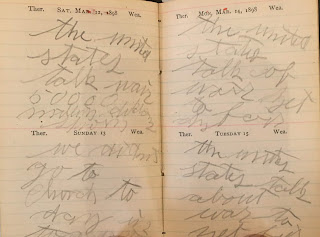 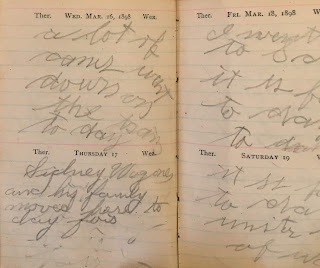 My research indicates that Andrew Ten Eyck was born in Selkirk or Coeymans on August 3, 1888, the son of Helen Huyck and Barent Ten Eyck. Just from reading the journal written by his ten-year-old self, I was not at all surprised to learn that Ten Eyck had a long and distinguished career with the U.S. Army Airforce, retiring with the rank of Colonel in 1952. He published a memoir, Jeeps in the Sky, about his service during World War II. Ten Eyck died in 1961and is buried at Arlington National Cemetery alongside his wife Doris Boomer Ten Eyck (1898-1996). She donated the diary to BHA in 1978.

But just what is a diary and what is journal? Sadie Holloway in her February 26, 2018 blog post on feltmagnet.com wrote that a diary is a book to record events as they happen and a journal is a book used to explore ideas as they take shape. Perhaps this is a useful distinction, especially in our age of therapeutic journaling, but the two concepts overlap tremendously. The historic diaries/journals I have read mostly record day to day events with here and there a bit of self-reflection. The diaries/journals I like the most provide insight into how lives were lived in the everyday and ordinary with the occasional intrusion of historic events.

Which brings me back to John R. Adams’ journals. They are a wonderful combination of diary and journal in the modern sense as described by Holloway. The Thursday, May 1, 1902 entry is a perfect example. It starts with the weather “fair, windy, cool.” Continues with a rundown of items purchased at Van Olinda’s, a sow for 16.50, 5 bushels of wheat at 79 cents each. Reports that Sam, Martha and Grace McCulloch came to call in the evening. And then the last poignant lines: The 44th anniversary of our wedding - a great change then we were young & strong now seem to be going downhill pretty rapidly – both Louisa & myself – but such is Life. 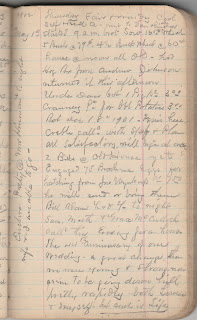 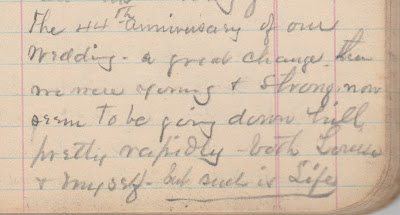 John R. Adams (1834-1905) married Louisa Haswell (1837-1912) in 1858. They had two children Grace and Jessie. Their lives were intertwined with the growing hamlet of Adamsville/Delmar. The set of five journals (or diaries) he wrote between July 2, 1900 and August 13, 1903 came to the Historian’s office through his descendant, great, great granddaughter Carol Carnes.

In the days and weeks ahead, I suggest you too keep a diary or journal, using it to record how Covid-19 has impacted and transformed your life. Personally, I am writing with an eye to someone else reading it, trying to keep the emotions somewhat at bay, and recording what a trip to town hall or a trip to the grocery store is like. One day, I will place it on file with the Town Historian’s Office. Perhaps you will do the same, and imagine what readers 100 years from now will think of Bethlehem today.