I was scheduled to give a tour of Elmwood Cemetery.  As you can guess given the current Covid situation, it has been cancelled. But that doesn't mean I can't share some favorite stories about the people buried there. So here goes... 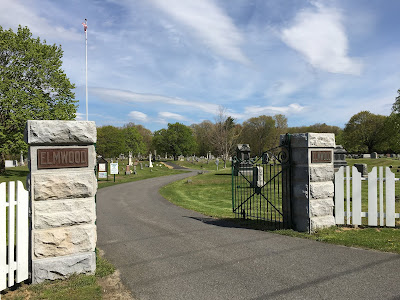 First, pop over here http://bethlehemelmwoodcemetery.com/index.html for some lovely pictures and a good overview of  the cemetery's history. Did you notice the weird website name? Formally, the cemetery is Bethlehem Rural Cemetery. That's what its incorporation records and official documents say. Informally, it is known as Elmwood Cemetery. That's what you'll find on the entrance gates. The name Elmwood helps distinguish it from Bethlehem Cemetery over in Delmar.

One family I return to again and again during the walk is the Niver family.  I've written* about Garret Niver, aka Garret Van Allen, whose memorial reads "Killed in the Custer massacre on the Little Big Horn in Dakota,  June 25, 1876, Ages 30 years, 4 months, 25 days."  And also about his brother, Conrad Niver, aka John Eddy, who went west to seek his fortune. He returned to Bethlehem with a new name and without his right arm which he lost to an amputation due to being shot by a desperado in Cheyenne, Colorado.  Other Bethlehem Nivers include  David Niver (a Revolutionary War veteran who was present at the surrender of Gen. Burgoyne at the battle of Saratoga, October 25, 1777), Charles D. Niver (town supervisor from 1910 to 1923) and David M. and Charles A. (both town clerks - David M. 1856-58, Charles A in 1884.) 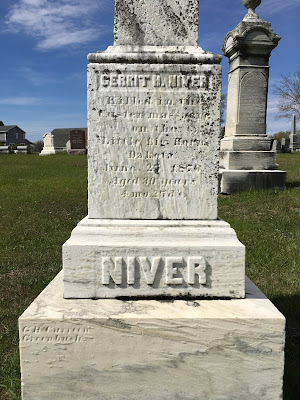 A favorite spot is Veeder circle.  The circle has a central monument with individual plots laid out around it like wedges of a pie.  That center monument has several Veeder names inscribed including Margaret Niver Veeder (1820-1886) wife of Christian Veeder (he was born in 1814, but I wasn't able to determine when he died - it is not on the marker - as of the 1900 census he was still alive.) On the tour we talk about the distinctive marker for their children who died very young, John, Johnny, Kitty, Harry and Maria.** We also talk about the story of Edith Veeder (about 1839-1889) who as a small child suffered severe burns and was not thought to survive.  But she did, living the rest of her life with her family.  One census identified her as a dressmaker. 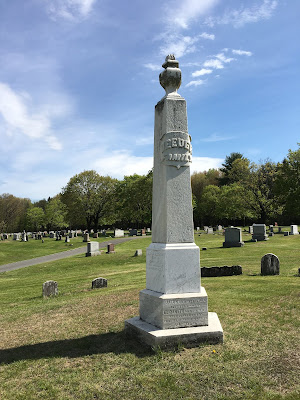 Another interesting monument is the one for David S. Russell.  I only noticed it because it has a kind of a weird double urn on top and a lot of writing on it.  Much of the writing is now illegible. But what is there is intriguing. He died August 2, 1859 in his 26th year, 6 months and 2 days a "Fearful railroad casualty"  You see why I had to find out more?

Below is a newspaper clipping about the story. The whole thing is three columns of very small type. Basically, the bridge collapsed when the train was just about across.  The engineer "hit the gas" causing the locomotive to jump forward breaking the coupling with the rest of the train.  The tender and passenger cars all went down with the bridge.

The eye catching monument for the Irwins has a marble figure on top.  This mourning woman is the only sculptural figure in the cemetery (except for a whole bunch of draped urns and eternal flames).  I couldn't find out why the Irwins have one. But their personal history is kind of fun.  W. Hartwell Irwin, 1875-1956, was an elevator man, first with Otis and in 1921 he opened Irwin Elevator Company. A newspaper tribute published when he was 73 and still working said he was the oldest elevator man in Albany.  Irwin was quoted as saying he would rather "wear out than rust out." Olive Eiseman Irwin, 1886-1968 was an instrumental part of the establishment of Irwin Elevator, serving as treasurer and secretary of the company until her husband Hartwell's death in 1956.  She then managed the company until it was sold in 1959. 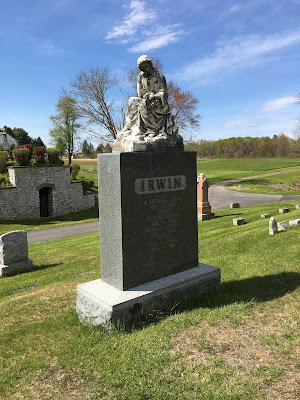 This is just four of the families I talk about.  Other folks on the tour include: the Baker family, owners of Grand View Farm; the Welches, famous Hudson River light keepers; the Wilkies,  regular farmers with a very prominent monument; the Selkirks, hamlet namesakes; the Dickson's whose son Peter served in the Civil War; the Heaths of Heath's Shady Lawn Dairy; and the Beckers, the most famous being Albertus who has a school named after him.

Phew - this cemetery tour is a lot of  walking and talking - but at this point - I feel like these folks are my family too and I so enjoy sharing their stories.***

*Shameless plug, read more about John Eddy/Conrad Niver in my book Bethlehem People and Places.  The article is called "Two Niver Sons and the Wild West." The book is available here  BuyMyBook or at I Love Books in Delmar.

** We often talk about how many children didn't make it out of infancy, and how if one did make it past toddler-hood, one was just about as likely to make it to old age as today. Just about anyway.

*** I scheduled dates for cemetery tours way back in January.  Who knows if they will happen.  Check back with me or the Bethlehem Parks and Recreation Department.
May 15 and September 26: Elmwood
June 27 and October 3: Bethlehem

**** All color photos were taken by me on Thursday afternoon May 14 about 4 pm, a lovely and peaceful  afternoon for photos. 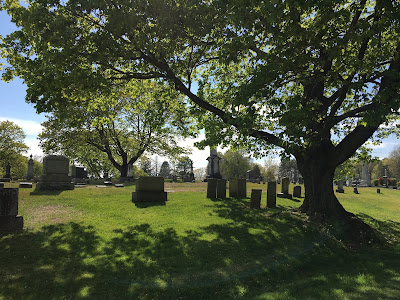 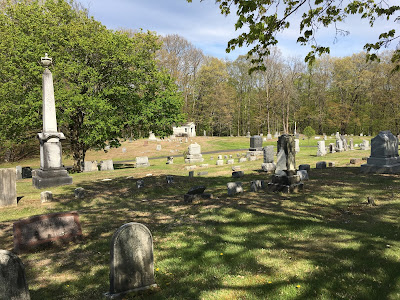