This is a snapshot of page 90 of my book Bethlehem. (And yes, that is a shameless plug for my new book Historic Tales of Bethlehem, New York in the corner.)  I've been corresponding with a reader about page 90 and he pointed out something I never noticed.  And a factual error. 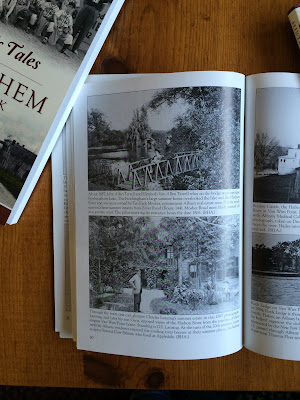 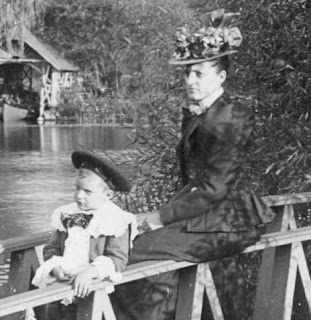 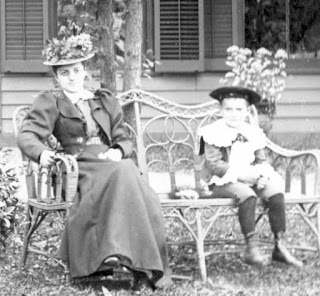 So who are they?  They are Elizabeth Van Allen Terrell and her son John Allan Terrell.

Elizabeth Van Allen  was born in 1868 to John and Anna Van Allen who had a farm on Long Lane in Bethlehem (now part of the Sabic property.)  Elizabeth married Emmett Terrell about 1888 and they had two children together: John Allan born in 1891 and Marjorie born in 1907.  While census records indicate the family lived in Albany (at least in the 1900, 1910, and 1920 US census), Elizabeth's obituary published February 27, 1957 in the Times Union says she was a life-long resident of the town of Bethlehem.  The obituary notes she was born at Van Wies Point and was a charter member of the Dutch Settlers Society. She died at age 89 at her home on Delaware Avenue in Delmar which she shared with daughter Marjorie.

And I must end with that factual error.  Bethlehem Historical Association records indicate that both photos were taken in 1897, not 1887 which is what I put in the caption for the bridge photo.  Totally my mistake.

Both photos were taken on the Lansing property at Van Wies Point. My reader and I have a conundrum because the older man standing in the photo on the bottom is noted on the back of the original photo as being G. Y. Lansing and that is what I put in my caption.  Unhappily, it has been pointed out to me that G. Y. was born in 1868 - which would make him only 29 in 1897.  I don't think this is a 29 year old. 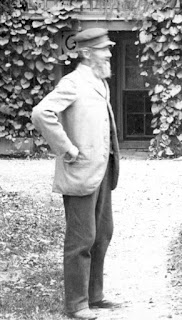 Many thanks to Armin Stelzer for his correspondence about these photos and lots of other Terrell and Van Allen family history.  It turns out he owns the house that Emmett Terrell was born in which is in Summit, Schoharie County.
Posted by Susan Leath at 12:45 PM