Sometimes while researching things I come across a turn of phrase that just catches my eye. John P. McHarg signed his last will and testament on April 28, 1824 and it included this phrase:

I give and bequeath unto to my Daughter Judith the sum of fifty dollars to be paid to her by my wife or executors when she shall get married or become of age and chose to do for herself.

Isn't it interesting that John P saw the possibility that his daughters (there is a similar line for daughter Charlotte) could do for themselves?  Marriage was not the only option. My 21st century eyes would like to read into that all sorts of independent woman scenarios.

Anyway, if you are curious, here's some more about the McHargs.

John P. McHarg's parents are Peter McHarg (1740-1817) and the daughter of Peter McKie* (1742-1784). They came over from Scotland in the 1770s eventually landing in Bethlehem where McHarg leased 223 acres from the Van Rensselaers.  The property was located on the south side of today's Feura Bush Road.

John P. (1770-1830) married Catherine Campbell (1781-1859) in 1802 and probably came into the property on Feura Bush Road at the death of John's father in 1817.  They had at least 9 children together (9 are mentioned in the will but another record says they had 11 children.)  John and Catherine farmed and most of their children were baptized in the First Reformed Church of Bethlehem.

After his death in 1830, the farm was divided between the couple's two sons Peter and John, roughly two 100 acre portions . You might recognize the historic homes that today define the east and west sides.

On the east, is this lovely place. 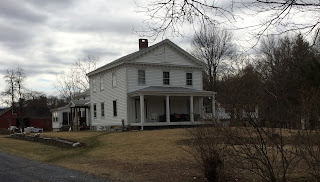 This was Peter's legacy - perhaps even the original homestead of the McHargs, at least the rear portion of the house which is said to date from the late 1700s. Peter traded with his brother-in-law Adam Holiday (husband of sister Judith) for Holiday's property in the town of New Scotland in 1839. Holiday sold to George A. Legget in 1845.  Peter, by-the-way, married Mary Ann Haswell in 1839.

This lovely marks the western portion of the land willed to John McHarg.

I know that this property was part of the McHarg farm, however, the provenance of this particular building is a bit murky.   Even Allison Bennett's articles regarding these properties in her book More Times Remembered don't help.  More research is in order!

And finally, here's a map from 1866 with the McHarg and Legget property clearly noted.  The prominent east - west street is Feura Bush Road.  The straight road heading south is today's Wemple Road.

* Annoyingly, I haven't come across her first name yet.