"his Wife" A Stained Glass Mystery 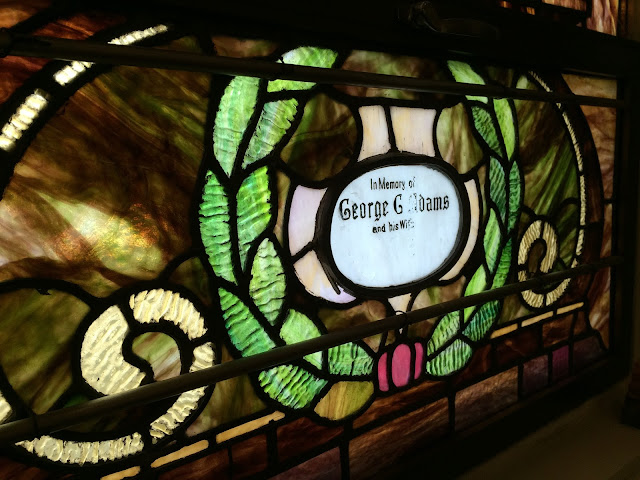 This inscription has bugged me for a while now.  It is found in my church: Delmar Reformed.  I admit sometimes my mind wanders during Sunday service and often lands on the stained glass windows.  Who are these people? And especially, who is “his Wife.”

As part of DRC’s 175th anniversary (we started in 1841 as the East Branch of Unionville Reformed Church) I’ve been researching the folks whose names are inscribed on the windows.  During our celebratory weekend of April 9 and 10, we’ll unveil a commemorative booklet which will include a chapter I call “People of the Stained Glass Windows.”

In the mean time….

“His Wife” is Mary Ann Scrafford.  Mary Ann is the daughter of William Scrafford and Angelica Douglas.  She joined DRC in 1863.  Mary Ann married George C. Adams and they had five children: Nathaniel, William, Julia, Mary and Lillian.  She died March 7, 1911 at the age of 79. The window was given by her son-in-law, Samuel Nuttal, husband of daughter Julia.

Mary Ann’s husband, George C. Adams was born in 1829 and died in 1900.  He was the son of Nathaniel and Rhogenia Adams and a prominent member of the Adamsville/Delmar community.  Census records consistently list George as a farmer.  He owned large tracts of land in what we now think of as Old Delmar. Even today, a title search of property in the area of Adams Place and Adams Street will often show the land was part of George C. Adams’ estate.  Adams served as Bethlehem’s supervisor from 1867-1870.

Here's the whole window, sideways - sorry.  It is one of 14 stained glass windows at Delmar Reformed Church that have names inscribed on them.
Posted by Susan Leath at 10:39 AM