As I am writing this, the Covid virus is turning our lives upside down in ways both profound and trivial. On a grand scale, my planned cemetery walks, now cancelled, are pretty insignificant.  I can communicate the information in different ways, and you can take a stroll in the quiet beauty of these places without me and a large group of people tagging along. I am also missing the Memorial Day Parade – a more significant cancelation in my mind.  Parades have been bringing the Bethlehem community together for a century or more while honoring those who lost their lives in service to our country. 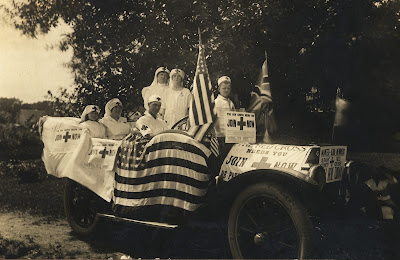 Getting ready for the Delmar parade circa 1918.

The men and women of our town have been heeding the call to serve since before there even was a town of Bethlehem.  Those cemetery tours I am missing so much highlighted veterans from the Revolution, War of 1812, Civil War, the Spanish American War and all the conflicts of the 20th Century.  Here are some of the veteran stories I would have shared if we were walking together.

Let me introduce you to the Slingerland cousins, John and William.*

John H. Slingerland (1844-1914) is buried at the Slingerland Family Burial Vault.  He and his cousin William Slingerland were veterans of the Civil War having served with the New York’s 177th Infantry. Both enlisted in October of 1862 when they were 18 years old. While assigned to different companies, both marched to the Albany train station on December 15 to begin their journey to New Orleans. Headquartered at Bonnet Carre, the 177th took part in skirmishes at McGill’s Ferry, and Pontchatoula, and saw action at the siege of Port Henry. The 177th, including the cousins, mustered out of service at Albany on September 10, 1863.

John, the son of William H. and Elizabeth Slingerland, worked with his father as a civil engineer. He married Alice Preston about 1873 and they had four children, William, Edward, Bessie and Florence. In the late 1880s he and his family moved to New York City where he was a masonry inspector. After her husband’s death, Alice and daughter Florence moved back to Slingerlands.

William Slingerland (1844-1928) was the son of John I. and Sally Slingerland. He and his wife Ellen Van Wie had seven children and lived their entire lives in Slingerlands. For many years he was an Express Manager with American Express Company. 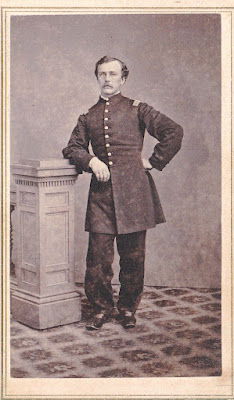 Captain David Burhans
David Burhans was born in Bethlehem in 1840, the son of Rachel and David.  Before the war, he was a mail agent with the Troy to New York route. In the late summer of 1862, he worked in town to recruit a company of soldiers for the 43rd New York Infantry.  Before the company set off, the ladies of Bethlehem presented Burhans with a sword, sash and belt. Company H was one of five that joined the regiment after the battle of Antietam.  Thereafter, the 43rd continued to see heavy action including battles at Fredericksburg, Chancellorsville, and Gettysburg. Burhans was in the thick of it.   It was during the terrible chaos at Spottslvania that Burhans lost his life.  He is said to have been last seen cheering on his troops after having captured two rebel flags. One tribute to him concludes “He was a young man of unblemished reputation, and highly respected by all who knew him, for his many virtues.” The extended Burhans family continued to live in and around Bethlehem and you might recognize Delmar street named Burhans Place. 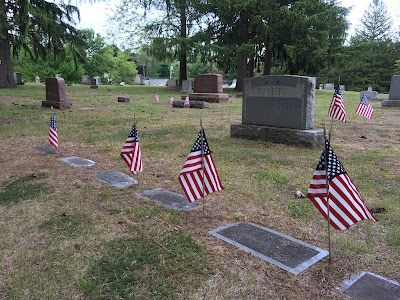 And finally, the Pier family, many of whom are interred at Bethlehem Cemetery.  Edwin and Dora Pier raised ten children, seven boys and three girls, in Slingerlands.  Five of their sons, Ira, Charles, J. Edwin, Clarence and Ellsworth, all served with the Army during World War I.

In a newspaper article, Dora Pier shared stories and letters about her sons. She wrote to Clarence, who was serving with the Fifth Balloon Detachment, that his brother Charles had a perfect record and his other brother Edwin was called out only once, for not saluting properly.  Clarence wittily replied that he had gotten bawled out “because I was not shaved; my shoes not shined; my leggings not on, all my buttons not buttoned; for not standing still at attention; for having my stomach stuck out too far; for not having my chest out far enough, and about 400 other things.” All five brothers served time oversees, with only Edwin being severely wounded while serving in France. They all were honorably discharged.

The Pier family truly demonstrated a deep commitment to serving our country. Oldest son Egbert Pier served in the U.S. Marines for twelve years as a recruiting officer. Youngest son Perry Pier served in during World War II.   The family purchased Liberty bonds and participated in Red Cross activities on the home front in Slingerlands.

These are just a few of the family stories I would have shared if we were able to take a cemetery walk together.  I invite you visit Bethlehem’s Veterans Memorial Park on Delaware Avenue or have a ramble through one of Bethlehem’s historic cemeteries and remember those who have served.

CORRECTION: In an earlier version of this story I mistakenly referred to the Piers as a Gold Star Family.  This is incorrect.  Gold Star families are those who have had a family member die in service to our county.  All of the Pier children survived their service.

Do you remember artist Edward Buyck?  He and his wife Mary Willard Vine lived on McCormack Road in Slingerlands. Bob Mulligan is doing some research for an article and would like to hear from you, rempundit@earthlink.net or call 518-439-3802.

Interested in some recreational driving during safe-distancing times? Visit the Bethlehem Historical Association’s website, BethlehemHistorical.org, for a Drive It Yourself tour.  It is a bit dated, but still fun.  https://bethlehemhistorical.org/

Work has begun on rebuilding the stonework of the Slingerland Family Burial Vault.  Please visit the website SlingerlandVault.org for progress reports and to donate.  https://www.slingerlandvault.org/