Sand, what a weird thing to be thinking about in February.  Hope you enjoy the article! 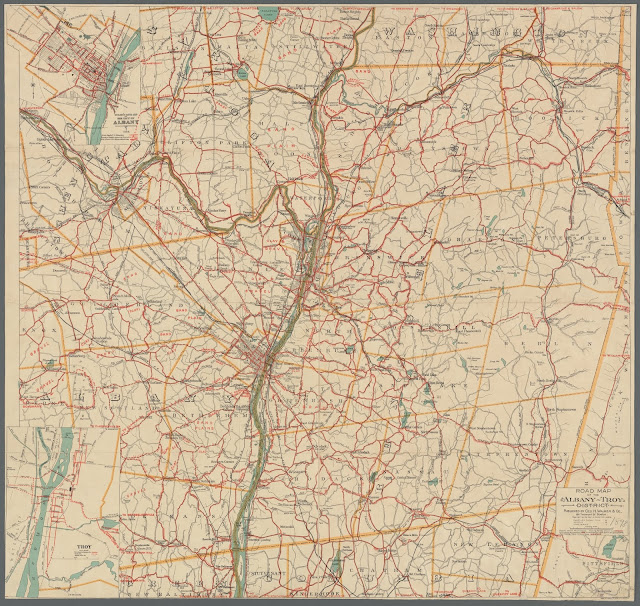 While trolling around the internet, I am alert for new digital documents related to Bethlehem history.  Not too long ago I came across a map from the New York Public Library entitled “Road Map of the Albany – Troy District.” It was published in 1897 by Geo. H. Walker & Co. of Boston.  While it very much appears to be a resource for those riding bicycles, what it got me thinking about was molding sand.

But first the map. As noted, it covers a wide swath of the Capital District including Bethlehem. Regular roads are shown with a double line. Cycling roads are solid red and poor cycling roads are dashed red lines.  Hills are indicated with slanted slashes of line, tilted to the right is up hill, to the left is down.


Along the red cycling lines are words like sand, clay, stony, and gravel.  I assume these indicate road conditions.  Right in the middle of what was to become my own neighborhood are the words “sand plains.” The words are right across what is modern day Elm Avenue south of where Feura Bush Road crosses. I live nearby and like to garden.  Let me tell you, there are no sand plains in evidence.  What I’ve got in my yard is heavy clay. Now I know, some of that was probably churned up in construction, but I wonder if the sand that used to be here was harvested.  Which is how this map led me to molding sand, an interesting nugget of Bethlehem history.

What is molding sand?  Sometimes spelled the British way, moulding, the sand is a naturally occurring product that is used extensively in foundries for metal casting. It has just the right combination of quartz grains and clay that, when formed into a specific shape, creates a mold that holds firm when molten metal is poured into it.  Foundries to this day use molding sand as it is effective and relatively inexpensive.

Bethlehem’s sand is part of a large layer of sand and sediments laid down in the late Pleistocene about the time that Lake Albany held the flow of water that would become the Mohawk and Hudson Rivers. Over thousands of years, sand and clay settled out of the standing lake water creating layers. To reach the molding sand layer, first the sod and soil is removed and then the molding sand is dug out. Then the sod and soil is replaced.  For many years this was strictly a hand digging activity as the layer of molding sand in the bed could run from just a couple of inches to several feet thick.

Slingerlands and Cedar Hill were the centers of molding sand production in Bethlehem.  The December 22, 1875 issue of the Coeymans Herald reports that shipping molding sand from Cedar Hill had become an important industry.  It reports that Mr. Cutler employed on average eight teams and drivers plus a number of shovelers to help load the wagons.  Each team drew an average of about six tons of sand a day. The sand was then shipped to buyers via the Hudson River.  As the article notes, some was “schoonered” to Eastern States and some sent via canal boats to different foundries along the Hudson.

As early as 1886, Whitehead Brothers was active in the sand extraction industry in our area.  That year it was reported by the Coeymans Herald that they were taking advantage of the fall weather and “getting out immense quantities of moulding sand from their several banks and hauling it to points convenient for shipping.  Their shipments this season have been large and they still have numerous orders to fill.” In 1891 C.B. Baker of Cedar Hill sold a farm of 51 acres to William Whitehead for $10,344.  It was said that it would yield a large amount of molding sand.

Whitehead Brothers got its start in 1841 with sand found in and around Sayreville, New Jersey.  Retired peach farmer Samuel Whitehead, Sr. established the business selling to foundries in New York City, an operation which was greatly expanded by his sons, the brothers Charles, William, James and John. Whitehead continued to be active in Bethlehem for many years, and the company is still a going concern today, known as Whibco.

Over in the Slingerlands and Delmar area, the sand was extracted from banks near Union Avenue. For example, the July 25, 1919 Altamont Enterprise reported that William McMillan of Delmar purchased the molding sand band from the Blessing estate on Union Avenue. Jones & Kilmer Sand Company were also active in Slingerlands at this time.  As late as 1960, the Altamont Enterprise reported “Much Moulding Sand Still Shipped From Slingerlands” and that William McMillen, now an agent for Whitehead Brothers, still looked after his sand business. Slingerlands sand was shipped to market via the railroad.

Over the years, I have talked with many folks who remember the piles of sand awaiting shipment  near the Slingerlands railroad station and the Selkirk station. It was a while before I personally encountered molding sand.  As it turns out, the Slingerland Family Burial Vault is built into a hill of mostly molding sand.  While working on that restoration project, I scooped up a handful and it truly does hold its shape when you squeeze it.  Molding sand just feels different than beach sand, even the wet sand I’ve left foot prints in or shaped into sand castles. Somehow, it’s very composition is just sticky.

If you are like me and like trolling the inter-webs for old photos, be sure to visit the New York Public Library's digital collection.  They seem to add to it daily.  Search under Albany County, N.Y. and lots of good stuff will pop up.

Also if you have molding sand stories or pictures - please share!
sleath@townofbethlehem.org

And another P.S.just because I know you like old stuff.  In researching the molding sand article, I came across this auction announcement.  It is an interesting glimpse into what was available on a farm in Bethlehem in 1920.  And it touts 7 acres of molding sand. 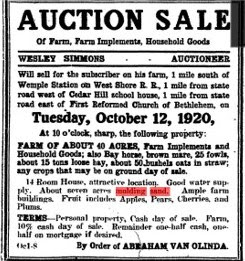 
By order of ABRAHAM VAN OLINDA