Is it the Joab Baker Homestead or Grand View Farm?  Or both?  One wonders. 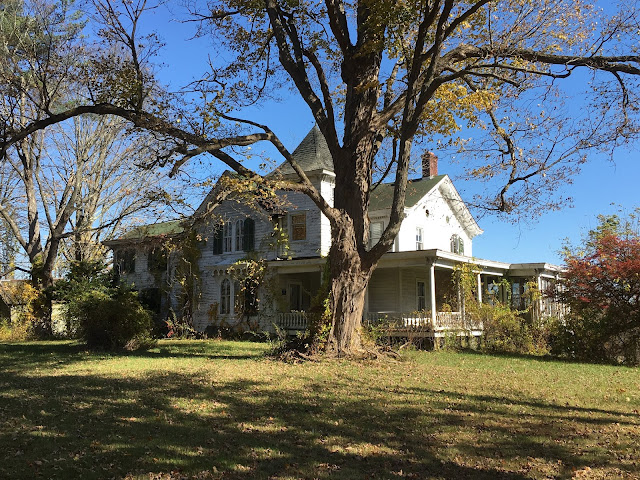 This beautiful, if somewhat shabby, home was the center of the historic Grand View Farm. It is currently for sale* by Scenic Hudson in an effort to preserve and rehabilitate its Italianate architectural features. The home sits well back from busy River Road with sweeping views to the east. That viewshed has been conserved by Scenic Hudson and will not be developed.

As the center of Grand View Farm, the house is deeply connected to the Baker family. However, there has been some confusion, at least in my mind, about whether Grand View Farm and the Jaob Baker Homestead are one and the same.

It is very clear from documentary evidence that this is Grand View Farm, home of Cornelius Baker and his wife Caroline Lasher from about the time of their marriage in 1846. It remained in the Baker family until 2005 when Grant Thorn, great, great grandson of Cornelius and Caroline, sold it to Waste Management. Deeds, newspaper clippings, historic maps and census reports all support this.

The connection to the “Joab Baker Homestead” is murkier. Let’s explore.

My confusion stems from a New York State Education Department historic marker that is now missing. The blue and yellow marker is reported to say BAKER FARM SETTLED BY JOAB BAKER OF CONNECTICUT IN 1791. Then there is the line NY 144, ½ MILE NORTH OF SELKIRK.  That location is definitely 1322 River Road.

This designation as the Joab Baker Homestead appears in a N.Y. State Historic Preservation Office survey dated June 1968. The survey includes the following under History and Significance: Settled early by Joab Baker of Connecticut, and supposed to have been originally build in 1791. Altered and remodeled so probably bears little or no resemblance to original. Been kept by Baker Family descendants for over 175 years. It goes on to cite the “N.Y. State Educ. Dept. Iron Marker" and “personal observation.”

The reason I am skeptical of the historic marker is found in Cornelius V. Baker’s biography in Howell and Tenney’s Bicentennial History of Albany County. Published in 1886, the book includes many such biographies. Here is the entire first paragraph of Cornelius’

“Cornelius V. Baker is one of the most prominent public men of the town of Bethlehem, descending on his father’s side from an old English family who settled, in the person of his great-grandfather, Joab Baker, in Roxbury, Conn. His grandfather, also named Joab, settled in Coeymans, in 1791, and married Hanna Ashmerd, whose father was one of the pioneer settlers of Albany.”

It follows with the statement, “Cornelius Vroman Baker… was reared on the old homestead in Coeymans.”

Did you catch it? Joab is described almost word for word as the historic marker, except for the settled in Coeymans part. C.V. was raised in Coeymans. Coeymans of course is not Bethlehem. I believe placement of the historic at 1322 River Road in Selkirk (or NY 144, ½ mile north of Selkirk) is wrong.

So, where does that leave us?

First, more research, which is underway. I’ve got a couple of leads about the marker to explore and have reached out to SHPO where James Carter of the Survey and National Register Unit is looking into their records. Another avenue is to reach out to the Coeymans historian to see if they have any info about a Baker Homestead. Also, an inspection of the house structure itself might turn up clues to its age as well.

Second, let’s celebrate Grand View Farm – it is certainly worthy in and of itself.

Cornelius V. Baker (1819-1893) and Caroline Lasher (1819-1895) married in 1846 and settled on a 120-acre tract acquired from the Sill family. His biography says “he early displayed a taste for agricultural pursuits and business, and devoted himself with rare perseverance to the accumulation of landed property.” With many acquisitions, Grand View Farm finally encompassed 450 acres. This is reflected in the 2005 deed between Grant Thorn and Waste Management. In the “being the same property as” section, it details 14 separate parcels described in links and chains and white oak trees, and mentions C.V. Baker, Francis Nicoll Sill and the Albany Green Turnpike (modern River Road.)

Cornelius and Caroline had eight children, baptizing them at the First Reformed Church of Bethlehem where they were members. Four died very young. Four grew to adulthood: Alexander, Charles, Edward and Abbie. These four were raised in the Grand View home with Charles going on to inherit it and live there with his wife Marion. Charles and Marion’s daughter Mable married John Thorn in 1910.

The doings of the Baker Family were covered in the local papers. A newspaper article from 1883 noted that Baker had 2 acres of strawberry plants from which he harvested 1000 quarts a day when the berry is ripe. Another noted that he developed his own melon for the New York City market that competed with the more locally famous Bender melon. Articles about Baker’s other business interests also appeared including the annual ice crop and a proposed Albany to Coeymans railroad line.

Personally, I like this one from 1911, “Grand View Farm, the pretty home of Mr. and Mrs. Charles N. Baker of Selkirk, was aglow last Monday night, when about twenty-five of their friends who had been invited by their daughters, Mrs. John Thorn and Miss Jeanette Baker, had gathered there in honor of their home coming after a very delightful ocean trip to Porto Rico. Not until a number of guests had arrived did Mr. and Mrs. Baker realize that they were receiving a surprise party. Mr. Robert Andrews of Albany, a noted magician, entertained … with his wonderful tricks which caused much anxiety and laughter, games were indulged in also.”

In conclusion, whether this house is the Jaob Baker Homestead as well as Grand View Farm, it is a beautiful piece of property, with a significant history, deserving of preservation and listing on the National Register of Historic Places. 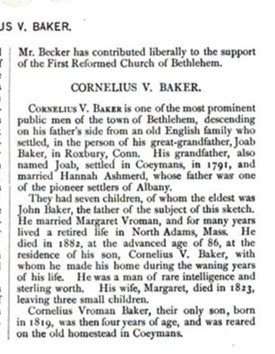 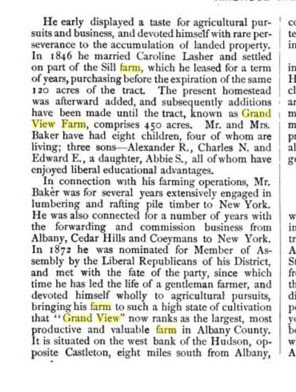 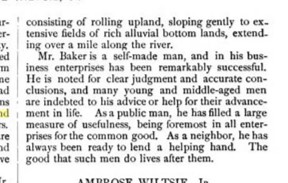