Shoes, Shoemakers and Shoes in the Wall
(and a bit about the Scharbauer's of South Bethlehem)

As we move into winter, do you think about your footwear more?  I do.  Are these boots waterproof? Will they keep my feet warm? Will they support my arches?  Thoughts such as these get me to wondering about shoes in history, and specifically in Bethlehem history.

Seemingly as long as there have been humans, there have been shoes to protect our feet.  Shoes have a long, long history from Paleolithic leather foot wraps to Roman sandals; from tiny shoes meant to fit the bound feet of Chinese women in the Tang Dynasty to the high platforms of the European Renaissance. And let’s not forget the iconic wooden Dutch shoe that became popular in the 1500s in the Netherlands.
Skipping ahead in time to the 19th Century, this is the time boot and shoe making went from a handmade process to an industrialized one.  Bethlehem residents could go to their local general store and buy factory made shoes or head into Albany for shopping at one of the big department stores.  However, one could still visit a local maker such as Ferdinand Scharbauer of South Bethlehem.

According to a biography of his son, Texas cattleman John Scharbauer, Ferdinand Scharbauer learned shoe making in his native Germany and followed the trade all his life.  It is not known exactly when he and his wife Rosanna arrived here, but their oldest child was born in New York about 1849 and the family shows up in the 1860 U.S. Census in Bethlehem. Ferdinand and Rosanna raised seven children in the South Bethlehem area.  In the 1880 Census, Ferdinand, age 70, was living with his son Christian.  Christian was a harness maker, a leather working occupation he perhaps learned from his father. In 1883, Christian and his family joined his brother John in Texas and they were both very successful cattlemen.  The other siblings remained in New York. Ferdinand (1809-1891) is buried next to Rosanna (1815-1878) at Mt. Pleasant Cemetery in South Bethlehem.

Traditionally, shoemakers and cobblers are two different occupations.  The writer at footfiles.com puts it succinctly. “At one time, shoemakers were the skilled artisans tasked with making shoes out of brand-new leather, while cobblers were the ones who repaired shoes. In fact, cobblers were forbidden from working with new leather and had to use old leather for their repairs. The difference between the two trades was once considered so vast, it was a serious insult to call a shoemaker a cobbler (the latter of which, not so coincidentally, is a term that also means to work clumsily or bungle).The shoemaking  and cobbler trades were forced to merge around the beginning of the 19th century when the introduction of mass manufactured shoes left shoemakers out of work and having to accept lower paying repair jobs."  https://www.footfiles.com/subject/cobbler

Next time you put on your shoes, think of the long history of footwear, the many styles that have come and gone.  Even consider the aglet, the plastic tip of the shoe string that makes it easier to thread your laces. 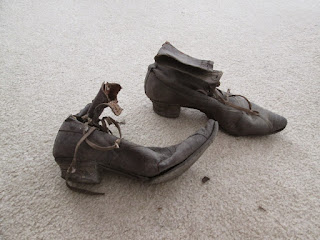 Concealed shoes are a fascinating find.  The ones pictured above were found in the wall under a window at a circa 1880 home on New Scotland Road in Slingerlands.  Shoes were placed inside walls and roofs going back to the 1400s in England and the practice carried over to the U.S. The shoes are almost always woman’s or children’s that are very worn. One idea is that they were placed to ward off evil spirits, or encourage good luck. Another is that they were related to fertility (you know the old woman who lived in a shoe and had so many children she didn’t know what to do.)  Interestingly, no written historic records about the phenomenon have been found, just the shoes themselves.

And finally, a side note.  Google John Scharbauer and/or the Scharbauer Cattle Company. It is kind of a fascinating story of how a young man from a small village in Albany County, namely South Bethlehem, went west and made it big in Texas. Look for this book: Historical And Biographical Record of the Cattle Industry and Cattlemen of Texas

I also found some interesting tidbits in the local paper about brother Phillip Sharbauer who stayed behind in South Bethlehem and made a good living for himself and his family.  He was a hay merchant and grocer. The 1900 US Census simply labeled his occupation as "Capitalist." The local papers had many entries for various events that took place at Scharbauer's Hall. Including skating - I couldn't figure out if it was ice skating or roller skating.  Or both. Fun! 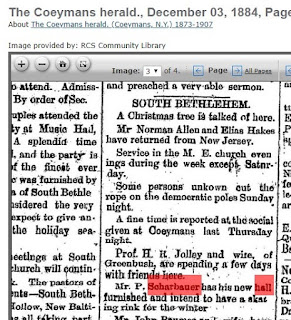 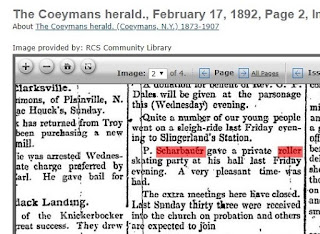