Pop over to Our Towne Bethlehem for the digital version - my article is on page 12.
http://www.ourtownebethlehem.com/

Tobacco and Cigars. What a strange topic I know. Here’s how it came up. Not too long ago while talking about the hamlet of Slingerlands, I used the quote below that describes the village in 1886.

Very nice right? But then, someone asked, “Where was the cigar manufactory?” I had no idea, but my curiosity was piqued. The question also brought to mind the ad for Pigaback Cigars with its cute picture of a pig with four little piglets on its back. The image was used by Dearstyne Brothers of Albany in the early 1900s and catches my eye every time I am researching in the Altamont Enterprise. The question also reminded me that tobacco was a very big deal in the early colonial times in what was to become Bethlehem. 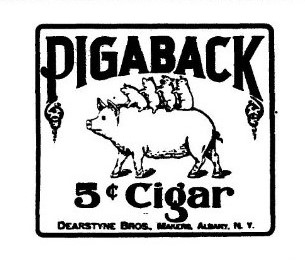 Tobacco use has a long history with the native peoples of the Americas. European explorers of the 1500s encountered it and brought the practice of smoking tobacco, and the seeds to grow it, back to their home countries. It is said Sir Walter Raleigh introduced smoking tobacco in pipes to England’s elite. Tobacco use spread quickly fueled by belief in its curative powers and it became entrenched in the American and European economies.

You might have heard of Albert Andriessen Bradt, the Norwegian? Often recounted is the story that he was the early settler for whom the Normans Kill was named. Bradt signed a contract in August 1636 with Killian Van Rensselaer to leave Amsterdam, travel to Rensselaerswyck and start a sawmill venture with two others. Van Rensselaer described the 29-year-old Bradt as a tobacco planter meaning he probably managed one of the tobacco plantations in Holland. There were tobacco farms there as early as 1616.

There is much documentary evidence of tobacco farming in general and Albert Bradt in particular in what was to become Bethlehem, especially in the correspondence of Killian Van Rensselaer. For example, in a letter dated May 10, 1638, Van Rensselaer writes Bradt, “This will serve to advise you that I duly received your letter in which you wrote that the tobacco looked fine…” The following May, Van Rensselaer writes to Bradt, “Now as to the tobacco which you sent me, it is a great loss to yourself and to me that the tobacco in these barrels was so poor and thin of leaf that it could not stand being rolled, which must be due to your having left too many leaves on the plants; furthermore the weight was short.” It must be noted that Bradt engaged in a number of activities in order to make a living in Rensselaerswyck including trading in furs, cattle raising, grain farming and sawmilling. By 1646, Bradt had left the tobacco farm to concentrate on his other money-making ventures.

Northern tobacco soon fell out of favor as the supremacy of Virginia tobacco grew. I did find evidence of one Bethlehem farmer raising tobacco in the Agricultural Schedule of the 1880 Census. Usher Otman, on his 34 improved acres, amidst the many bushels of corn, oats, rye, wheat and potatoes, produced 30 pounds of tobacco. He is the only one in 39 pages of records, reflecting approximately 200 farmers.

And what about that cigar manufactory in Slingerlands? It was owned by Samuel Dickson. Dickson turns up as early as the 1870 U.S. Census where he is listed as a “segar maker.” At that time, he lived with his uncle and aunt, Alexander and Elizabeth Dickson McGilva. He was still making, and one assumes selling, cigars in the 1880 census and by the 1892 NY census he is a listed as a merchant. The 1900 census has him as a grocer. All this time he was living in Slingerlands with members of the McGilva side of his family. As a side note, Dickson was active in Republican politics, winning election as Collector in 1872 on a ticket topped by Albertus Becker for Supervisor.

Dickson remained single all of his life, passing away in 1900 at about age 68. He is buried next to his aunt and uncle at the New Scotland Presbyterian Church Cemetery.  His cousin Elizabeth McGilva was in charge of settling his estate, and her legal notice in the Altamont Enterprise is fascinating. In searching for heirs and interested parties, the notice begins with a listing of a whole host of people from the Dickson family of Cigarville, Onondaga County, New York.

While I don’t know how Dickson landed in Bethlehem or how he learned his trade as a cigar maker, a large part of his extended family was located in a village so famous for its tobacco product that they called the place Cigarville. One newspaper clipping headlined “Tobacco Farming Lost Onondaga County Calling” describes Cigarville as one of the “liveliest settlements in Onondaga’s tobacco land.” It continues, “a thriving little community which derived its name from its ranking industry, the manufacture of cigars from tobacco cultivated in the surrounding region. In its hey-day the Cigarville factory employed between 75 and 100 men, described as a rowdy, rollicking, quick tempered lot.” With the decline of the industry around 1900, the hamlet of Cigarville became Clay Station.

I don’t imagine Dickson’s operation in Slingerlands was on the scale of the Cigarville factory. He probably had a small business hand rolling cigars and selling them locally. Cigar making in general ranged from large manufacturers, there were several in Albany, to smaller operations such as Dickson’s. One 1886 book reports “The smokers of cigars and chewers of tobacco are as numerous in Albany as elsewhere. Most of the wholesale dealers and manufactures are also engaged in the retail trade… all of the retail stores manufacture to some degree…there are over one hundred firms in engaged in this branch of trade in Albany.” Elsewhere in the book, the writer notes that the Cigar Makers Union was organized in Albany 1879 and included between three and four hundred members.

This exploration of tobacco and cigars does not even begin to look at the history of pipe smoking and cigarettes, or the health consequences we are familiar with today. While I am not at all nostalgic for the bad old days of widespread cigarette use, the smell of cigar smoke does bring back fond memories of my dad. And historically, it is interesting to wonder about the roots of a wide scale industry that is still impacting life today.  If you’d like to read further, check out the book Tobacco How an Exotic Plant Seduced Civilization by Iain Gately.