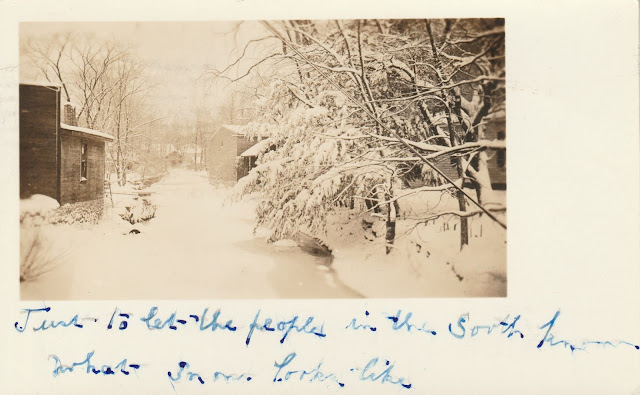 As you must know by now, I love old postcards.  I picked up a few at the DAR antique show this weekend and just had to share.

The snowy day one above was labeled South Bethlehem with a question mark.  While the front could or could not be South Bethlehem, the family names written on the back are all about South Bethlehem.   It was written by Cora Baumes to Helen Mallory and mentions Mrs. Callanan.

We know the Callanan name from the stone quarry in South Bethlehem, the Baumes family had a large farm on Willowbrook Avenue (Historian Allison Bennett wrote up the Baumes family homestead in an article entitled "1820 Home of good taste.")  Have you heard of Mallory's corners?  It is in the vicinity of the modern intersection of Elm Avenue and Creble Road (the roads in that area have changed a good bit since Long Lane/Creble was re-built.)  Looking at the 1866 map, there were Callanans, Baumes and Mallorys in all three places.

Here's a little bit about the writer, Cora Simmons Baumes:

Cora was born in 1862, the daughter of John M. Simmons and Ella Couse.  The 1870 census has the family including brother Robert firmly planted in Slingerlands. Her dad is a farmer and butcher.  She married John Baumes in 1881.  By the 1900 census the couple lived in Slingelands sharing a house with Cora's mom - who is listed as the head of the household.  Skipping ahead, John dies in 1922 and the 1930 census has the widowed Cora living at 832 Jay Street in Albany in a two family house. She occupies one flat and her daughter Ruth and Ruth's husband George Otis live in the other. I found a great little newspaper snippet from 1931 that noted that Cora and Ruth had arrived home aboard the S.S. Majestic having gone on a nine week cruse to "the foreign countries."

Anyway.... Cora shared her snow view with her friend in Florida Mrs. Helen Mallory writing on the front "Just to let the peoples in the south know what snow looks like" 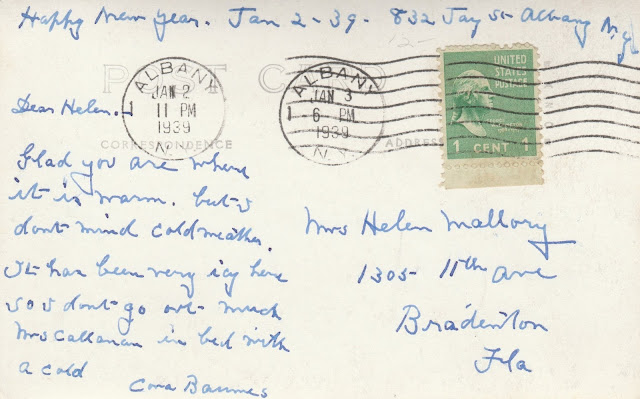 Cora wrote, "Dear Helen, Glad you are where it is warm but I don't mind cold weather. It has been very icy here so I don't go out much."  I am certainly feeling that today, as it is snowy and icy and I haven't been anywhere except shoveling my driveway today.

And because I can not help myself, I looked up 832 Jay Street on Google Street View and was rewarded with this fabulous photo.  Look at those kids on the porch! Would Cora approve? 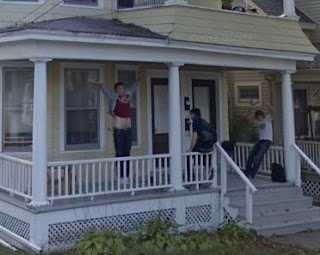