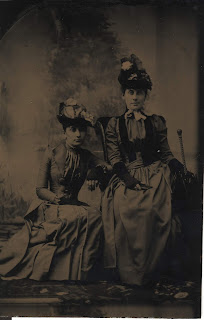 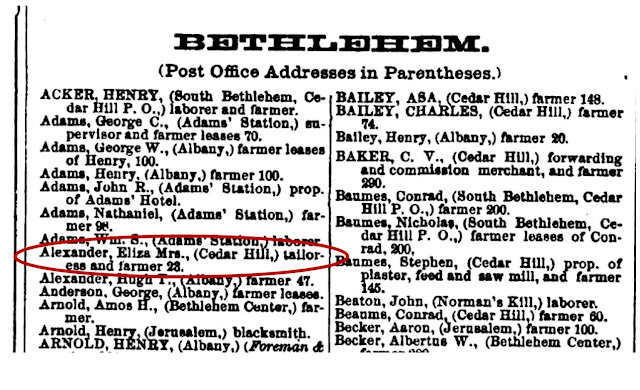 Child’s 1870 Gazetteer of Albany County is a fascinating window into Bethlehem and I am working with the Bethlehem Historical Association to mount an exhibit focusing on the various professions, trades and occupations listed.

Per usual, I am always fascinated by the women.  If I counted correctly, there are 582 entries and only 21 of them refer to women.  One of whom is Mrs. Eliza Alexander, tailoress and farmer.  What is her story?

I’ve been able to piece together a little bit from census records and especially the book Records of the People of Bethlehem.

Eliza Hutchinson was born in 1828. When she was about 30 years old, she married Thomas Alexander. Their marriage on April 8, 1858 is in the records of the First Reformed Church of Bethlehem.

The Alexanders were a fairly prominent Bethlehem family.  Thomas Alexander, born November 15, 1809, was the son of James Alexander (1767-1850) and Jennet Jolly (1766-1844.)  James Alexander appears to have been residing in Bethlehem as early as 1797 and served as supervisor from 1831-1832. Thomas married Barbara Hutchinson on May 7, 1845.  The couple had at least 5 children, Josephine, Mary, Henry, Eleanor and David.  David, born in March of 1847 died that August.  His mother Barbara had died a month earlier in July.  The following April, Thomas married Eliza Hutchinson.  It is unknown how, or if, Barbara and Eliza are related.  Sisters? Cousins?  We do know that Thomas and Eliza had two children, Hester and John. Thomas died in 1865.

The 1860 U.S. Census is revealing.  Thomas (a farmer with real estate valued at $2000) and his wife Eliza (a tailoress) are living with four children between the ages of 6 and 13.  I believe these are Barbara’s children. In 1870, after Thomas’ death, Eliza is said to be keeping house. Her real estate value is $2500.  In the household are 3 of Barbara’s children, plus Eliza’s own Hester and John.  The accompanying 1870 Agricultural Schedule reports that Eliza Alexander’s farm (23 improved acres including one milk cow and one pig) produced 30 tons of hay. I would say that Eliza is keeping house and farming. According to the 1866 Beers map, Eliza’s farm was located just south of the First Reformed Church.  In today’s geography, that would be near the intersection of Church and Clapper Roads just off Route 9W.

Ten years later in 1880, Eliza and daughter Hester are the only ones in the household with Eliza again keeping house.  Interestingly, Hester is listed as a seamstress. In the agriculture schedule, the farm only produced 4 tons of hay.  By the 1892 New York Census, Eliza and Hester are living in Albany and Eliza would die the following year, 1893.

What does it mean to be a tailoress, or a seamstress? Or a woman farmer in the 1870s? What occupations were available to women?  Eliza was certainly recognized as a prominent person to be listed in the Gazetteer. Yet, I find no remarks about her in the local newspapers.

During this period Hugh J. Alexander had a 47acre farm over on the corner of Wemple and River Road.  His family is mentioned in the newspapers. Records indicate this might be a cousin of Thomas Alexander.  His listing in the Gazetteer is just below Eliza’s.

NOTE:  The women in the photo are from the right time period, 1860s or 70s, and they are from Bethlehem, but they are NOT Barbara or Eliza Hutchinson.  They are unidientified members of the Adams-Blanchard family.