Have you caught the Times Union's recent series called Slavery Unearthed?  Pop over to their web page and put Slavery Unearthed in the search box for a variety of articles on the topic.  Look for Amy Biancolli's very well written articles including "New York's slave past unearthed" subtitled "Trove of records detailing state's era of bondage, and lives of the enslaved, accessible in database"
Part of the impetus for the article is the release of the New York Slavery Records Index, a searchable database put out by John Jay College of Criminal Justice.  It contains "Records of Enslaved Persons and Slave Holders in New York from 1525 though the Civil War."
So of course I had to search for Bethlehem related stuff.  You can too, pop over to https://nyslavery.commons.gc.cuny.edu/  and search away your afternoon.
I couldn't find a huge amount for Bethlehem.  Just two "records of enslaved persons" which came from Albany's Manumissions and Registrations. That would be Tom and Gin.  Tom was registered in 1801 when he was about 57 years old by his holder John D. Winne of Bethlehem.  The 1803 record for Gin says she was sold to James Sinacre for $30 for a term of 21 years. Her holder was Jurian Hogan.
I've written previously about Bethlehem's own record of slaves book.  (Shameless plug - the article is Chapter 32 in my book Historic Tales of Bethlehem New York.)   The handwritten account book dates from 1799 to 1827 and records births and manumissions of slaves right here in Bethlehem. I even made a spreadsheet of all the names of both slaves and owners.
One wonders about the story of Jack, Nat, Dick, Charity and Sally, all slaves manumitted and set free by Francis Nicoll on December 26, 1814.  Earlier in the year, on May 1, he set free Dian and Tim. Or the story of Bett.  The births of her three children, Mink, Deyann and Gin, were recorded by John Hogboom October 6, 1821. The children were born in 1813, 1817 and 1820.
To get another look at slavery in Bethlehem, I turned to the 1800 census.  Basically, it has four main columns: Free White Males, Free White Females (these two are further divided by age brackets), All Other Free Persons except Indians Not Taxed, and Slaves.  The very first entry is for Maria V Rensselaer whose household had 6 white males, 2 white females, 0 other free, and 6 slaves.  That very first page also records the household of Cezar Wood a "free Negro" which had three people.

Going to the very end of the Bethlehem section we find the totals for the whole town (remember that at that time Bethlehem was twice as big as today and included all of the town of New Scotland.)
1769 free white males, 1692 free white females, 13 other free persons, and 254 slaves.  Don't you wonder about the stories that lie hidden in those numbers? 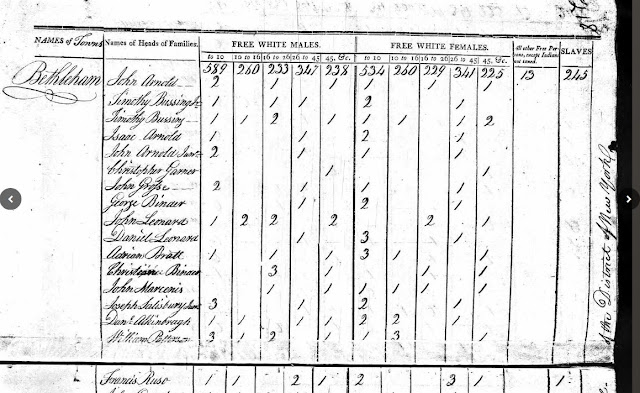 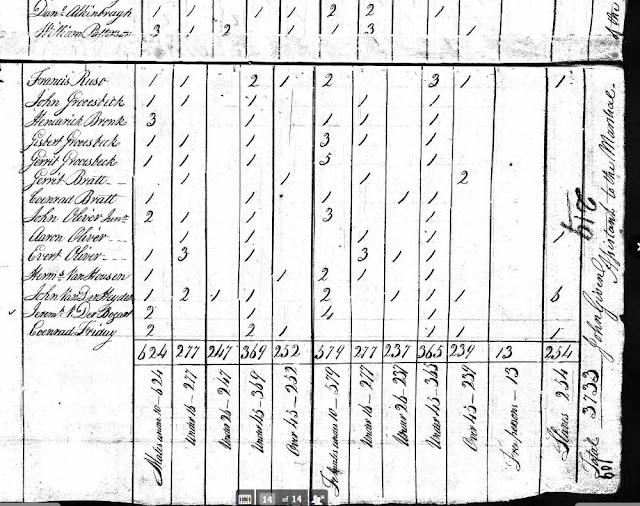