Maybe you've heard of the famous Vanderbilt family?  They are on my mind because of a fun Bethlehem connection.

Today's poking around on the internet did turn up a very cute story about how William Henry Vanderbilt and Maria Louisa Kissam met.   William is the son of Cornelius - the famous Commodore - and Sophia Vanderbilt.  Maria is the daughter of  Samuel and Margaret Kissam.  Samuel Kissam was the pastor of the First Reformed Church of Bethlehem from 1817-1841. The Kissam family lived in Cedar Hill for those years, possibly at the Nicoll Sill House on Dinmore Road.  One of Samuel and Margaret's children is buried at the cemetery there - little Catherine Matilda who died at age 2 in 1828.

The following story of how William and Maria met is told in a newspaper article published by the Jamestown Evening Journal published January 30, 1899.  The column is forthrightly entitled "Our New York Letter Gossip About A Playwright, A Humorist, and The Vanderbilts." 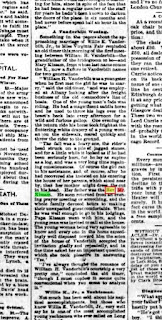 Here's a transcript of the article:

Something in the papers about the approaching marriage of Willie K. Vanderbilt, Jr. to Miss Virginia Fair reminded an old timer this morning of the first meeting between William H. Vanderbilt – the grandfather of the bridegroom to be – and Mary Kissam, from whose last name comes the K., now a fixture in Vanderbilt names for two generations.
“William H. Vanderbilt was a youngster when he first met the girl he was to marry,” said the old timer, “and was employed at Albany looking after the freight business of the old commodore’s line of boats.  One of the young man’s fads was riding.  He had a magnificent saddle horse and he used to throw his legs over the beast’s back late every afternoon for a wild and furious gallop.  One evening on the return ride his horse took fright at the fluttering white drapery of a young woman on the side walk, reared quickly and threw the rider to the ground.
“The fall was a heavy one, the rider’s head struck on a pile of jagged stones, and for a little while it looked as if he had been seriously hurt, for he lay as supine as a log, and was a very long time regaining consciousness.  Of course, the girl ran to his assistance, and of course, after he had recovered she insisted on his entering the house of her parents, which stood nearby, that her mother might dress the cut in his head.  Her father was the Rev Mr. Kissam.  He soon returned from an evening prayer meeting or something, and the whole family devoted hours to making their unexpected guest comfortable.  When he was well enough to go to his lodgings, Papa Kissam went with him, and the young man was invited to call at the house.  The young woman being very agreeable to know and every one in the home exceedingly well disposed toward him the scion of the house of Vanderbilt accepted the invitation gladly and repeatedly, and in due time asked her an important question, which she took pleasure in answering ‘Yes.’


“I’ve always thought the romance of William H. Vanderbilt’s courtship a very pretty one,” concluded the old timer, “though I must confess it seems quite conventional when you come to analyze it.”


Who knows if this story, told by an "old timer" and clearly noted as "gossip"  actually happened, but the events described certainly might have taken place here in our little town of Bethlehem.  We do know that William Henry and Maria Louisa were married by her father on September 28, 1841 at Cedar Hill and the marriage is recorded in the records of the First Reformed Church.  The couple went on to live remarkable lives.

And get thee to Google for more on William Henry Vanderbilt - he is pretty famous you know.  And be sure to appreciate his epic sideburns!