How do you name a historic house?


I am off on a tangent this morning thinking about how we name historic houses.  This is because I am helping with a project that will produce a Google map of historic sites in town.  Specifically for bicyclists, but it will be very useful for all.   How do you label all those points on the map?

Is it the Parker-Winne House or the Pieter Winne House?  And what about Mrs. Winne, Rachel VanAlen, surely she had a lot to say about the construction of her home?  Pieter and Rachel were married January 21, 1720 and their oldest son Daniel was likely born in November 1720 (he was baptized at the Dutch Reformed Church in Albany on November 20.)  The house was built sometime in 1720.  Can't you hear Rachel telling Peter to hurry up and get the house built before the baby is born?  Shouldn't it be the Pieter and Rachel Winne House?  And what about Parker?  That's Brian Parker, the current owner! 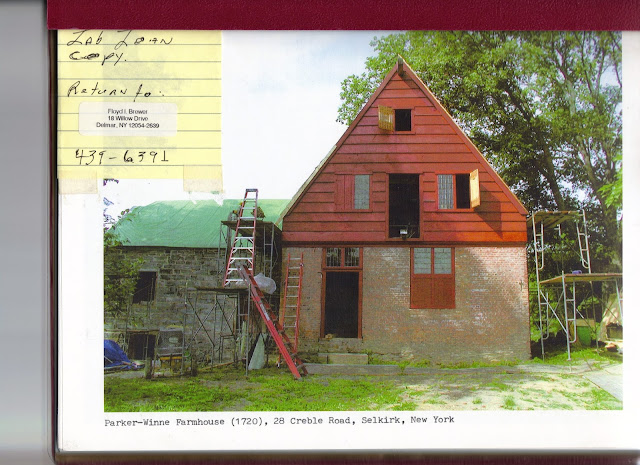 I often use the name Pieter Winne House to distinguish it from the nearby Daniel P. Winne House.     This is Pieter and Rachel's son.  And again, what about Mrs. Winne? Daniel married Jannetje Deforest in 1744.  The house was built in 1751.  Already married 7 years, they had two children before the house was built and then had four more.  Surely Jannetje was a vital part of this family too. Pop on over to the Metropolitan Museum site for more on the Daniel and Jannetje Winne House. (Yes, I just changed the name.  Sounds nice doesn't it?)
http://www.metmuseum.org/toah/hd/dutc/hd_dutc.htm


Is it the Nicoll-Sill House or the Bethlehem House? Nicoll refers to Rensselaer and Elizabeth Nicoll who had the house built circa 1735.  Sill refers to Capt. Richard Sill who married their daughter Elizabeth. The Sill branch of the family were later owners.  I'm kind of OK with using just the last name.  The name Bethlehem House goes way back as well.


And what about houses that have specific names?  Is it the Cornelius Baker House or Grand View Farm?  This a property that few living today remember by either of those names.  That property is owned by Scenic Hudson.  Should it be the Scenic Hudson-Baker House?


Here's another, how about the Glynn Mansion?  To be fancy, I sometimes say the Governor Glynn Mansion (sadly ignoring Mary Glynn). It is often identified as the former Elks Club or the Mansion at Cedar Hill.


I don't have any answers this morning, but I hereby resolve to always look for the women of the family and reference them whenever I can!