This week I spent time trying to find info about three Bethlehem gentlemen each of whom point to a different aspect of the Town Historian’s job description.

First, for my Our Towne Bethlehem Then & Now article I was looking for info about Alonzo Schaupp.   The starting point is the fact that in 1903, Alonzo sold a home on South Street in South Bethlehem to Jessie M. Palmer, wife of Edwin Palmer.  (Interestingly enough and still a mystery, only Jessie is listed on the deed summary that I found on line.) Using my trusty* online resources I was able to deduce that Alonzo was born in 1857, died in 1915 and is buried in Mt. Pleasant Cemetery in South Bethlehem near his wife Ana (1857-1895).  They had two children, Bessie and Harry.

The second gent is Cornelius V. Baker, owner of Grand View Farm on River Road in Selkirk.  Here’s his portrait from 1886. 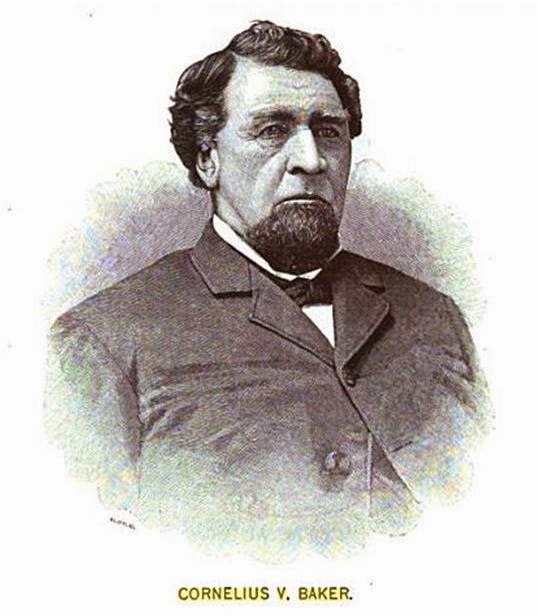 Part of the historian’s job is responding to FOIL requests from developers and engineering firms doing their due diligence before a project.  They usually ask for a property’s previous owners and uses from the Historian’s Records. Most often I’ve got nothing, this time I had Cornelius and his imposing farm house to tell the developers about.

The third gent is Edwin T. “Ebby” Thacher.  While chatting with a town resident, I was asked if I knew that at one time Ebby Thacher lived on Delaware Avenue in Bethlehem.  My response, well no, and who is Ebbie Thacher anyway? That is often how these types of inquires start.

I did recognize the Thacher name from Albany politics and nearby Thacher Park.  Turns out Ebby was a “key figure in the creation of Alcoholics Anonymous.”  Bill Wilson, founder of AA, always referred to Ebby as his sponsor.  Paul Grondahl in his book These Exalted Acres: Unlocking the Secrets of Albany Rural Cemetery has a nice biography of Ebby – who of course is buried at Albany Rural.  But the mystery still remains -  I have not confirmed that Ebby lived on Delaware Avenue.  It is possible, but is not yet proven.

*Yes I know those online resources are not always that trusty – always look at the original document!

Today I was able to do a little more research about Edwin Throckmorton Thacher.  Here are a few facts I was able to glean.  Edwin was born in Albany on April 29, 1896, the son of George H. Thacher and Emma Louise Bennett and youngest brother of  George, John, Thomas, and Kenelem. He had two siblings, Emma and Roland, who died at young ages before he was born.  He lived at the family home at 111 Washington Avenue and attended nearby Albany Academy. The 1915 NY census lists Edwin, age 19, occupied at school.  The home on Washington Avenue must have been a large one - George Thacher age 68, occupied with the iron foundry, was the head with 7 other family members and 5 servants.

The middle part of Thacher's life is pretty well documented, especially in regards to Bill Wilson and AA. Edwin's life includes a story of alcoholism with a cycle of being on and off the wagon.  All online bios that I read have the same version of his last few years.  Here's how Grondahl puts it. "He did not drink the last two years of his life, when he lived on a farm with friends outside Ballston Spa."  Hmmm - this is where the story about Delaware Avenue in Delmar comes in.

The Albany Rural Cemetery Burial Card for Edwin lists his place of death as Ballston Spa, but it lists his "late residence" as 1 Oakwood Place, Delmar, NY.  (That's on the corner of Delaware and Oakwood where Main Square is today.) At the library today I checked Polk's Directory for Colonie-Bethlehem-Guilderland.   Edwin is listed at 1 Oakwood Place in the 1963, 64 and 65 issues.  He was living with his brother Kenelm and Kenelm's wife Catherine. Kenelm operated his KR Real Estate from this location as well.