So did you vote this week?
On September 14, 1918 you would have had the chance to vote on the local option of New York State's Liquor Tax Law.  Essentially, should Bethlehem be wet or dry?
Here's the official notice: 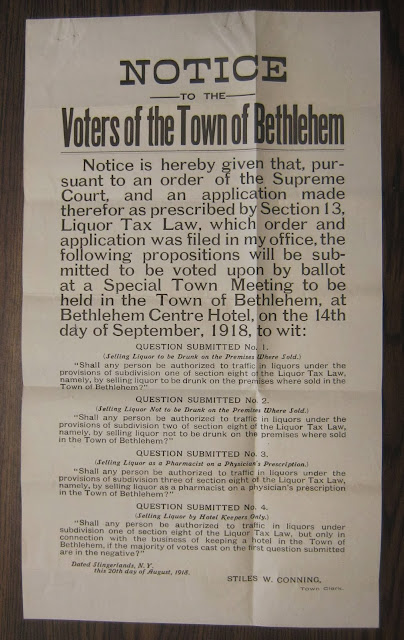 Voters responding with a resounding NO on all questions, essentially voting the town dry.
This is actually the second vote taken on the issue.  The year before a similar election was held but was declared invalid by the State Court of Appeals on a technicality.  In response, Bethlehem's drys rallied their supporters to petition for another election, and then rallied the town's people to get out the vote.
Here's how the Altamont Enterprise described the scene:

“Men and women in this village kept their automobiles running throughout the day, from the time of the opening to the closing of the polls, conveying voters to Bethlehem Center, where the election was held.  Never has an election been held in this town where such marked interest was displayed by both sexes as this one.” (September 20, 1918)

The 18th amendment to the U.S. Constitution was passed in December of 1817, ratified by the states in 1919 and took effect January 1920.  After a disastrous run of 13 years, national Prohibition was repealed in 1933.

So now my question, when did Bethlehem go back to being wet?  Even today in 2013,  as per NY liquor laws, a town can vote itself dry.

Read more in Allan S. Everest's enjoyable book Rum Across the Boarder the Prohibition Era of Northern New York.  Read about bootleggers, rum runners, and our very own Route 9 otherwise known as the Rum Trail from the Canadian boarder to Albany and points south.