Believe it or not, this article stems from my further investigations into prohibition era Bethlehem.

While reading the book Prohibition Thirteen Years that Changed America by Edward Behr I had a "oh that has a Bethlehem connection" moment.

The first chapter deals with early temperance movement leaders and their concerns about the evils of liquor consumption.  Besides "dyspepsia, jaundice, emaciation, corpulence, rheumatism, gout, lethargy, palsy, apoplexy, melancholy, and madness", we have the always fascinating "spontaneous combustion."  Where people simply burst into flames.  Then the author quotes Dr. Eliphalet Nott, president of Union College "an expert on spontaneous combustion who firmly believed that


these causes of death of drunkards by internal fires, kindled often spontaneously in the fumes of alcohol, that escape through the pores of the skin, have become so numerous and so incontrovertible that I presume no person of information will now be found to call the reality of their existence into question."

So what is the Bethlehem moment?

Hidden down a long driveway on Glenmont Road is a large and charming old brick home.  The property came into the Nott family in 1841. Judge Benjamin Nott, who lived there with his wife Elizabeth Cooper, is the son of Eliphalet Nott and his first wife Sally Benedict.  See the excerpt below from New York Genealogy for a poetic description of Nott. 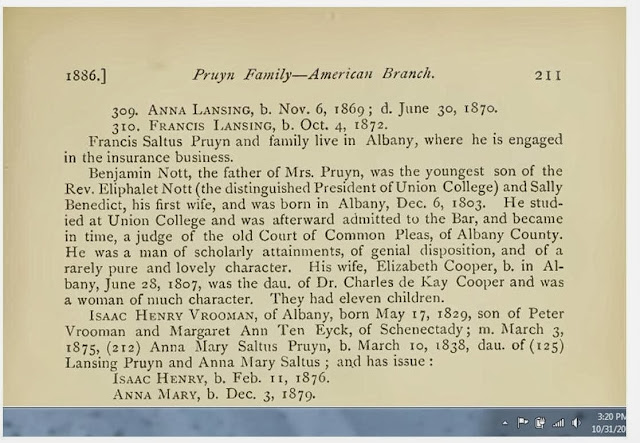 As a side note, Elizabeth's sister Margaret Cooper married Benjamin's brother Joel B. Nott.  I believe they also lived in Bethlehem for a while.

And, interestingly, Benjamin Nott also spoke out on temperance issues.  According to the Howell and Tenney's Bicentennial History of Albany County, on July 4, 1841 "the temperance societies of Albany joined in procession to the Second Presbyterian Church where an oration was given by Benjamin Nott."

Now I am wondering if any one in Bethlehem every spontaneously combusted.
Posted by Susan Leath at 1:12 PM