The view from the parking lot

While waiting for the Daughter yesterday afternoon, I got to thinking about this house. Do you recognize it? 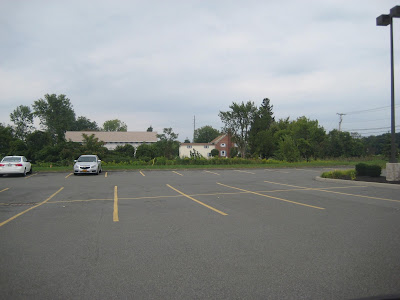 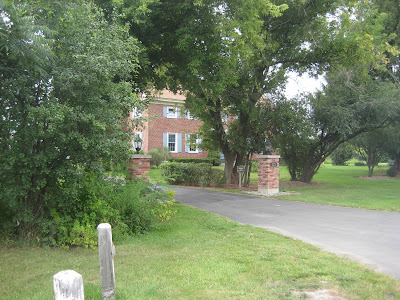 (True confession time: the barking German shepherd and the Beware of Dog sign prevented me from getting a really good picture)
This is one of several old Haswell homes in the Town of Bethlehem.  John Haswell and his wife (either 1st wife Mary Miller or 2nd wife Mary Haliday) and 10 children arrived from England in November 1774 and rented 300 acres from the Patroon. This is the land near the Haswell Farms development on Feura Bush Road.
Son Henry Haswell built the house shown here about 1800. The Albany-Bethlehem Turnpike (chartered in 1804) soon ran in front of his house.  Today, busy Route 9W rumbles away out front.  Take a look at Kenwood Avenue on a modern map (go ahead, pop over to Google Maps).   Kenwood used to make a straight shot over to 9W ending up just south of this house.   Today, Kenwood ends at the Delmar By-Pass and the house sits just south of where the By-Pass connects to 9W.
For a time, the house served as a tavern for weary stage coach travelers and farmers carting their produce to Albany along the plank road.  Allison Bennett in her article Barracks-barroom on the plank road notes "the oak panelled dining room has replaced what was once the bar room of the tavern." (You can read the whole article in her book Times Remembered.)
Sitting in the Panera parking lot, I tried to imagine the days when the local Bethlehem militia trained in the fields surrounding the house.  As early as 1812, soldiers trained here and Col. John Moore trained troops in these fields during the Mexican War in the 1840s.  The Civil War era brought military activity as well with the 16th New York Infantry and the 28th New York setting up camp here in June of 1861.  The site came to be known as Camp Morgan after NY Governor Edwin Morgan.  Read more about life in the Bethlehem encampment in Military Heritage chapter of Bethlehem Revisited written by William F. Howard.
Take a drive out to 9W and glimpse this wonderful old house and see if you can imagine the day when it was a farm surrounded by fields.
Below is the house about 1980.
﻿
Posted by Susan Leath at 6:19 AM