Walking the Freedom Trail in Boston last week got me to thinking about what Bethlehem was like during the American Revolution.

One thing to recognize is that there was no Town of Bethlehem on June 17, 1775 (that's the date of the Battle of Bunker Hill - we had a long, long walk there on Friday).   Our "address" would have been The West Manor of Rensselaerswyck which was part of Albany County. Albany County was much larger than it is today encompassing  what are now Albany, Columbia, Rensselaer, Saratoga and Schenectady counties and large parts of Greene and Washington counties. Plus a bit of Vermont.

The Town of Watervliet was created in 1788 and the Town of Bethlehem was created out of Watervliet in 1793.  During those revolutionary days, folks lived "on the Manor" and paid their rent to the Patroon.  Farms were concentrated near the Hudson River, the Normanskill and the Vlomankill along with the  sawmills, gristmills, coopers and blacksmiths necessary to farm life.  The First Reformed Church of Bethlehem had been established in 1763 with services conducted in Dutch and English.

Below is a list of men from Bethlehem who served the Patriot cause during the Revolution.  It is from Bethlehem Revisited.  You might recognize some of the last names. 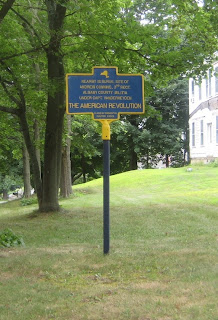