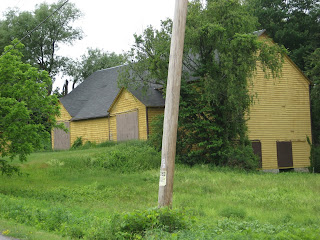 Driving along Meads Lane this morning, I was again thinking about barns and hay.  Some of the fields there have been mown, with the cut hay lined up and ready to be baled.  Hay was big business for Bethlehem farmers with much of it being sent to the hungry horses of New York City.

Above is a large hay barn on Clapper Road.  It was built by the Clappers in 1892 and has a built in hay press inside that was turned by horse power.  Below is an ad I found on the web for a horse powered hay press.