This past weekend I had the pleasure of visiting a whole bunch of historic houses.

On Saturday, I was in Hurley, New York for their Stone House Day.  What a special place with many, many old stone houses.  Dutch doors, jambless fireplaces, and huge wooden beams abound.  We heard stories of George Washington, British spies and  pot cheesers (visit the website for an explanation of that one.)  We got so used to the low ceilings and big beams that a visit to the parsonage was startling with its smooth ceilings (all the beams are covered up) and knotty pine paneling installed in the parlor.  Not exactly historically accurate, but cozy none the less.

My favorite was the "bonus" house.  Across Hurley Mountain Road from the Ten Eyck Bouwrie farm (which was on the tour) is the Newkirk House.  Not officially on the tour, but for sale so the real estate agent had it open.  While the lovely stone work, original windows, many additions and rooms (5 bedrooms!) were great what was most appealing to me was that it was pretty much empty.  Other houses on the tour were packed with family stuff and antiques, some with museum-like displays and lots of old colonial stuff.  Which is all well and good and very interesting.  But having the house empty makes you really notice the architecture, the shape of the rooms, the quirks of the stair case, the angle of the ceiling and dormer windows.  The modern bath and kitchen.  The old open hearth with built in cupboards on each side.  The 1888 carefully etched in the window by a happy bride.  You notice different details without the distracting stuff.  Plus you can imagine living there - not that I could afford it! 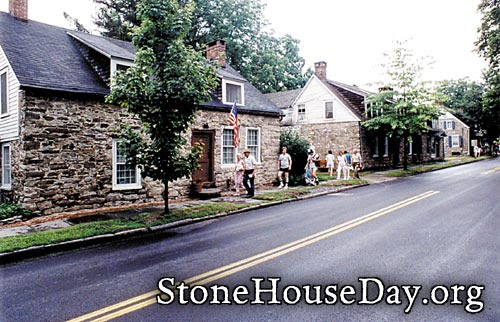 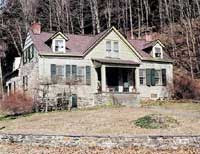 A historic view of the Newkirk house (www.panoramio.com/photo/72138803)


On Sunday I was able to visit the Barent Winne house which is located near Henry Hudson Park in Bethlehem.  It is also for sale and the agent was having an open house.

What a contrast to the day before.  An idyllic setting on the Hudson River, ornate Italianate style, large breezy rooms with high ceilings, sweeping verandas with views of the river.  Just lovely.

Hurley, with its busy Main Street and stone houses lined up close to the street, seems so different from this c.1857 home in its park like setting.

back in the day, the Hudson River was the bustling main street between the hinterlands of Bethlehem and New York City. Bethlehem farmers took their cash crops (oats, hay, apples) to Winne's dock and sent them to market in NYC.  Farmers and shopkeepers would order goods that were delivered to the dock for pickup.  The Winne's had a busy operation here what with their dock and store as well as storage buildings for coal and  hay.   Their elegant home oversaw it all.


Here's what Allison Bennett wrote about the Winne home in her article "A careful restoration on the river" published in 1976.

Barent Winne Sr. was born in 1818 and during the next several decades the Hudson River became one of the major transportation arteries of the nation. Barent was a man with a penchant for business. He established a barge and freight line at the river house in 1860. He built large warehouses on his dock near the house, where merchandise was stored for shipment on barges to New York and other markets. Farmers of Bethlehem brought their apples, vegetables, hay and other farm produce here to be loaded on the boats, and Winne's Dock was known far and near as a "Hudson River Landing." He also established a trading store where the farmers could purchase needed goods and supplies, even coal in later years. All of these items came to the dock by boat from the larger cities.


From all of this activity prosperity naturally developed. We find that in 1868 the old stone house, probably no longer thought fashionable was torn down, and Barent Sr. built the present house. His son, Barent Winne Jr., resided there and lived to an old age, sitting on the front porch watching the river traffic from his rocking chair, white-haired and with a blanket wrapped around his knees. He was childless, but he was always ready to grant permission to the local families and young people to enjoy a swim in the river from his beach on the hot, humid summer days we so often have here in the Hudson Valley.