So many things have lined up lately to get me thinking about trees.

The spring issue of New York State Archives magazine had an article called the "Battle for the Elms."  I happen to live in Elm Estates, where there are no more elms.

I was reading a book called The Overstory: A Novel by Richard Powers, a writer with a powerful way with words.  An early chapter introduces a character named Nicholas Hoel, but the true star of that chapter is the American Chestnut tree.  Powers goes on to weave people and trees and nature into an incredible story.  Sadly, the magnificent American chestnut tree is also no longer around either.

And lets not get into the ash trees and the emerald ash borer.  It is just too depressing.

Happily about this time the Town of Bethlehem introduced their street tree survey project, and continues their efforts to conserve open spaces in town.  Which I have to remind myself that open spaces include forests - not just fields.  Open and free from development is more the idea.

Anyway... here's the article, which opens with another inspiration - the beauty that can be created from the wood of all those trees.

The inspiration for this article is a magnificent tool chest in the collection of the Bethlehem Historical Association. Plain painted gray on the outside, inside are exquisite wooden inlay designs that include a walking frog, a woman hanging laundry, and a compass rose. The chest was made by Richard Coleman for the practical purpose of holding his tools, but also to show off his skills as a cabinet maker. Born about 1860, he learned his carpentry and cabinet making skills from his father and uncle while growing up in Albany. Later in life, and certainly by the 1910 U.S. Census, he lived in the Normansville/Elsmere area of Bethlehem. His son donated the chest to BHA in 1971. 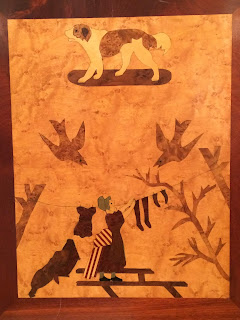 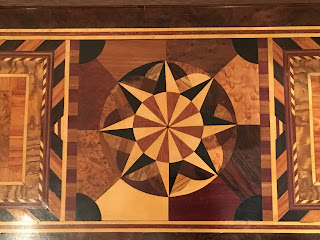 That beautiful wood came from trees of course. Trees are often romanticized, but there are more trees in Bethlehem now than when we were primarily a farming community. Fields for pastures and meadows, corn and oats, needed to be cleared of trees. However, most farms did set aside land for a wood lot. Trees, timber and lumber were important for building and heating.

Often logs from those wood lots were taken to the local mill to be cut length-wise into planks of various useful sizes. The rough boards could then be planed smooth. Charles Coonley’s Slingerlands operation is one local example of these steam powered mills. Another is Aussem’s Mill in South Bethlehem. In addition to sawing and planing wood, both used steam energy to grind grain for feed and flour, and to press apples for cider. Aussem’s also generated electricity for the hamlet.


Charles Coonley opened his mill about 1899 just off of Kenwood Avenue then known as the Delmar and Slingerlands State Road. The steam boiler, fueled by scrap wood, was definitely a fire hazard. A 1912 newspaper article reports that Coonley’s saw and cider mill was destroyed by fire. The fire was generated when a spark from the engine room landed on some wood shavings. The village bucket brigade was able to save the nearby house and barn but not the mill. The article reports that this was the third fire at the location. Even Coonley’s 1932 obituary remarks about the danger of fire. “He was the owner and operator of the Slingerlands mill, which, until several years ago, had always been run by steam generated at the plant. Since then the installation of electricity has so revolutionized the business that all chances of the mill being regarded as a fire hazard were completely removed.”  It goes on to note that Coonley had a “very quiet and unassuming manner, and those who knew him always held him in the highest esteem.”


Charles Coonley and the Aussem brothers ran small scale, local operations.  Bethlehem’s neighbor to the north, the City of Albany, was a major player in the lumber industry in the mid to late 19th century. The Albany Lumber District was known far and wide, and was the largest lumber district by value in the United States in 1870. The industry was facilitated by Albany’s connections to the Erie Canal and Hudson River. Most dealers were wholesalers wheeling and dealing to make the most profit possible. The district was located between Broadway and the Hudson River close to where, today, Nipper looks out from his roof top perch. Did you know that Erie Blvd. (where Huck Finn’s is) was literally where the Erie Canal used to run?

Getting back to Bethlehem, and thinking about all those trees sawed into lumber, I wonder about today’s trees. How old is the oldest? How big is the biggest? How do you even tell how old a tree is without chopping it down to count the rings or invasively taking a core sample? Google helpfully supplied a link to various Tree Age Calculators. I used the one provided by CliftonParkOpenSpaces.org and estimated that the pin oak tree in my backyard, at 84 inches around, is about 80 years old. That puts its sapling days in the 1930s, right about the time the Van Allen family sold their farm. That farm eventually became my neighborhood of Elm Estates.

Why don’t you measure a tree in your yard and send me the results? I’m sure we have 100+ year old trees in town. How about 200 or more? I’m sure there is a tree out there that can beat my oak’s 84-inch circumference. Please get measuring and email me the results at sleath@townofbethlehem.org.   Use the calculator below to figure out how old your tree is.

If you would like to see Richard Coleman’s tool chest in person, the Bethlehem Historical Association’s Cedar Hill Schoolhouse Museum, 1003 River Road, Selkirk, is open Sunday afternoons from 2 to 4pm. Free. Stop by and take in the exhibit All in a Day’s Work.

PS I have no idea why the font changes. Not being all that tech savvy, I am not going to spend all morning attempting to figure it out.  Sorry.