While looking for information on Charles Coonley, I came across these "Local Brevities" in the Altamont Enterprise's Slingerlands Bulletin.  It touched on so many interesting aspects of building the "Underground Crossing" that I just had to share.

One item that really stood out for me is this one: The work of cutting off one corner of the Frazier house, next to the post office was commenced this week.

Last year I was able to take a walk through this house - not knowing anything about it except that it was now owned by Albany County.  It is very strangely laid out inside with very few architectural details remaining.  It also looks odd from the outside and has no access from New Scotland Road, only from Kenwood and across the railroad tracks - now the rail trail. Based on the snippet above, I bet some of those oddities are explained by the house having a corner cut off and being so near to the digging out of the underpass.  Just look at the picture below - that fancy second story window certainly looks pasted on the front of a nondescript house. 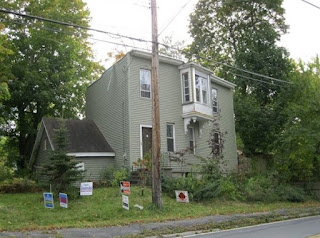 Of course I did some research.  Here's what I wrote last year:


From 1954 through 2005, the property was owned by members of the Flansburg family.  Luther and his wife Ruth lived there for many years.  They first show up in the Tri Village directory in 1945 at 1538 New Scotland Road. A deed recorded in 1993 (when Ruth transferred the property to Gary Flansburg) notes that this is the same premises that was conveyed to Luther Flansburg and Ruth Flansburg by Odd Fellows Home Association of Eastern New York by a deed dated March 11, 1954.

Further research turned up the connection to the Odd Fellows runs though Jesse Guernsey.  Jesse and Hattie Guernsey, along with son Louis, moved to Slingerlands as early as 1902 and Jesse seems to have joined the Odd Fellows shortly thereafter.  He appears regularly in the Altamont Enterprise under a report on the installation of officers from 1904 right on up to when he moved to the Odd Fellows Home in Stuyvesant, NY in 1933. His obituary (he died December 28, 1952) notes that he was a “past grand of Friendly Union Lodge, I.O.O.F. of Slingerlands and took a deep interest in the affairs of the organization.”  (IOOF = Independent Order of Odd Fellows)

Regarding the house, this snippet also turns up in the newspaper April 22, 1924, Jesse Guernsey has purchased… the Frazier cottage on the New Scotland Road in this village.”  This is reflected in the deeds to the property.

In 1924 various heirs of Catherine Frazier sold the property to Jesse Guernsey.  Associated with that deed, is another (dated 1926) in which Leah Haswell releases any rights or interest in the property.   Both Leah Haswell and Catherine Frazier are daughters of Albert and Katherine Slingerland, whose names turn up in many, many deeds to property in Slingerlands including this one.

Things get a little fuzzy before that for the property.  It appears to me that this little triangular piece of property was part of land owned by the Slingerlands in 1878 when they transferred to Albert T. Eaton, after that, in 1908, is a transfer to Catherine Frazier from Edward Van Slyke.  How Eaton and Van Slyke fit in is unclear to me.

After I wrote the above, it did become clear that the Odd Fellows met in the brick building next door - modern day Village Pizza.  Not the house. There is a great article in the January 15, 1976 Spotlight about it - page 14  http://www.bethlehempubliclibrary.org/webapps/spotlight/years/1976/1976-01-15.pdf   I'm thinking Jesse Guernsey willed the house to the Odd Fellows who promptly sold it to the Flansburgs.

And after the Brevity above, I can confirm that it was Catherine Frazier's cottage, at least in 1912.

And finally here is a nice then and now of the area I'm talking about in Slingerlands.