Our Towne Bethlehem May 2019: Wheat and Bread

Writing this article literally made me hungry for bread and donuts.  Reader beware!


Wheat has long been a part of the Bethlehem story. In the very early days of what was to become our town, in the fall of 1631to be exact, Brant Peelen planted 24 acres of wheat on an island in the Hudson River at the mouth of a creek. The island is now known as Westerlo Island and the creek is the Normans Kill. Peelen had come to New Netherland the previous year along with his wife Lubbertje Wouters, their children Lysebeth, Geert and Gerritje, and other settlers. They were part of Killiaen Van Rensselaer’s grand plan to exploit the resources of his new territory. In the years to come, the Van Rensselaer Manor grew to cover thousands of acres on both sides of the Hudson, including Bethlehem.

The Van Rensselaer’s developed a decidedly feudal system whereby settlers could secure land in exchange for annual rents.  Landlords like the Patroon Stephen Van Rensselaer preferred payment in wheat. Besides tenant farmers simply not having any cash money, the value of money could fluctuate wildly.

The collection of the Bethlehem Historical Association has a receipt book kept by Adam Winne from 1769 until 1830 recording his rent payments made to the Patroon. His 300+ acres were located along the Hudson north of the Vlomankill. The very first entry in the journal is written in Dutch and dates to 1769. Another early one records his payment of “thirty five shipel” of wheat, ten fowls, and one day driving. He also paid ten pounds for rent on a grist mill. It is dated February 12, 1776. A shipel, or schepel in modern Dutch, was equivalent to a bushel.

During this time, wheat was one of several cash crops for Albany area farmers. Others included peas and hay. Lumber was also an important part of the economy. A 1790 ad in the Albany Register hints at the economics of the time. W. M. McGill, at the North Gate, Albany, stated that he had “just received a neat assortment of dry goods… which he will sell on low terms, for cash or country produce.” He also has on hand “a supply of liquors and groceries… West India rum, brandy, gin…also sugar and tea…cod fish and cider.” The ad ends with this “Cash paid for staves, wheat and peas.” Country produce is just what Bethlehem farmers could barter, and they could receive needed cash for staves (wooden posts or planks), wheat and peas.

What happened to all that wheat? Much of it was sent to market in Albany or floated down the Hudson River to New York City. Bethlehem farmers were nicely situated to take advantage of these markets. Bethlehem also had access to the Normanskill and Vlomankill where water powered grist mills to grind the wheat into flour. And what is the best result of all that flour? Bread of course.

Baking on a commercial scale was common early on. A list of inhabitants of the City of Albany compiled by the British army in 1756 for the purpose of quartering troops starts with Saunders Lawnson, baker. Of 329 residences visited within the stockade, seven included bakers. Bakers only slightly out number brewers (wheat is essential for ale and beer.) In 1798, Albany Mayor Abraham Ten Broeck published the Assize of Bread (an ancient method of setting the price for bread) as “a loaf of good common or tail wheat flour, to weigh one ounce eight ounces for 6 d.” 6d would be six pence in the British system.

Over the years Bethlehem has had an assortment of bakeries often featuring home delivery of bread, cakes and pies. One was Dempf’s Bakery on Delaware Avenue. Louis Dempf operated his shop from 1927 until 1954. Down the street at the Four Corners was the Delmar Bakery in operation from the 1930s until the 1960s. A discussion of bakeries would not be complete without mention of Freihofer’s whose home delivery service was extensive in our area. A 1961 ad in the Spotlight highlights batter-whipped Sunbeam bread and a whole host of other items including butter parker house rolls, strawberry rhubarb pie and jelly donuts. The ad ends with a reminder to watch Freddie Freihofer on WRGB on weekday afternoons. I’ll leave it to you the reader to go to YouTube to enjoy some Freddie Freihofer videos.

Pop over to http://www.ourtownebethlehem.com/ for the latest issue.

Skip over here to browse that 1756 census
http://exhibitions.nysm.nysed.gov//albany/census1756.html 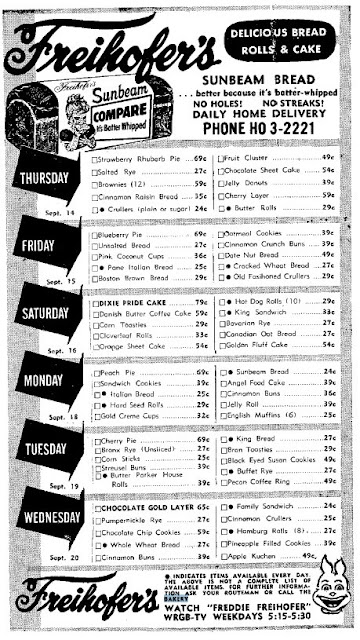