A WWII Story - the Nicholson Brothers

Having just celebrated Memorial Day, and the remembrance of D Day having been in the news lately, my thoughts have turned to Bethlehem during World War II.  I have written about the Army Observation Posts that were active here during the war (the article is in my book Historic Tales of Bethlehem.) Bethlehem Revisited lists over 1,200 men and women from Bethlehem who served including 30 that were killed in action.

Which brings me to a story I just heard. Karen B. was down at the Cedar Hill Schoolhouse (home of the Bethlehem Historical Association) and two older men stopped by.  It turns out they had gone to school there in the 1940s.  As they reminisced about where their desks were and the games they played, they shared the memory of when WWII ended.  The superintendent made regular visits to the different schools in the district and stopped by Cedar Hill in May of 1945.  He spoke with the teacher, and then dismissed school early - the students were thrilled of course to get out early.  This is what he told the youngsters - (as remembered by the two oldsters and paraphrased by me) Today Germany surrendered - the war is over.  As you go home stop at every house and knock on every door and tell the news.

Think about that for minute. No tv, no internet, no twitter.  Kid power delivering the news door to door.  Of course it would be all over the radio and newspapers.  Victory in Europe Day, or V-E Day, would be celebrated on May 8 for years and years.

Now, I did paraphrase, the oldsters didn't say it was May, but V-E day is May 8, 1945. The Japanese didn't surrender until August, and Gen. MacArthur didn't formally accept the Japanese surrender until Sept 2.  So I am thinking the kids would have been out of school for the summer then, so it had to be the May European event.  Anyway, it is a nice little snippet of WWII era Bethlehem.

The above picture shows Cedar Hill School students in 1938.  John Therien (back row, 2nd from right) and Francis Myers (second row from back, 3rd from left) were killed in action during World War II.  Carl Henry (back row, first on right) died from wounds he received while serving.)

Just received this pictures of the former students - meet Jim and Jerry Nicholson! 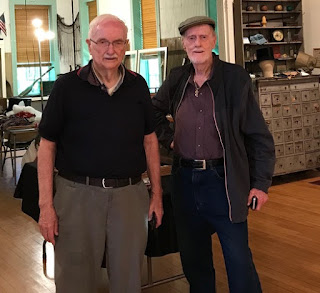