This comic perfectly illustrates what comes to my mind when I think of  "beaver hats".
Below is my more sober article from April's Our Town. 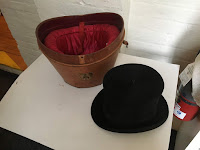 In the collection of the Bethlehem Historical Association is a leather container, heavy and solid, with a tight-fitting lid. Prying off the top reveals a red satin interior. The padded niche contains a top hat. The hat is black, shiny and very soft to the touch. It has always been described to me as a beaver hat. But is it really made from beaver fur? My recent research suggests probably not.

The idea of a beaver fur hat resonates with those familiar with Capital District history. Before 1664, Albany was known as Beverwijck meaning Beaver District in Dutch. The anglicized version, Beverwick, still turns up today. Beavers figure prominently in local iconography. There is one on Bethlehem’s town seal and plenty around Albany. My favorite are the ones atop the Marcus Reynolds designed Hook and Ladder No. 4 firehouse on Delaware Avenue.

The desire for beaver hats impacted our colonial history. Beaver pelts were a prime trade item between Native Americans and the Dutch traders. Some sources say that in 1671, 80,000 beaver pelts were exported. One fun fact is that the most prized pelts were coat beaver. These were literally coats made of beaver furs that had been worn by people, primarily Native Americans. With the fur worn on the inside, the coarse outer guard hairs wore off and the inner hairs were softened and enriched by contact with human skin. Parchment beaver, where the skins were stretched flat and dried, was the other type of beaver commodity.

As a side note, an article about beaver hats would not be complete without mention of the phrase “mad as a hatter.” The inner hairs of the beaver fur were felted and formed in a 7 hour, 30+ step process that turned beaver and other pelts such as rabbit into hats. An essential step used the poisonous chemical mercury. Prolonged exposure to mercury vapors led to erethism mercurialis, sometimes called mad hatter disease, a disorder that affects the entire nervous system.

All that beaver fur trading is now ancient history. By the 1850s, silk plush had been introduced and took over as the preferred material of hat making. Figuring in the ascendancy of silk is the fact that beaver populations were in severe decline. By the late 1800s there was nary a one to found in New York. Beaver didn’t begin to come back until the 1920s. Today you can see plenty of evidence of these hard-working animals on Bethlehem’s creeks and streams, especially out at Five Rivers.

Getting back to our top hat, it is stamped on the inside with the name “Boyce & Milwain, Albany, N.Y.” James Milwain opened his shop in Albany in 1838 selling “beaver and other hats, caps, gloves, mittens, umbrellas, furs of all kinds, buffalo and fancy robes.” William Boyce joined the operation in 1870 and James’ son established the partnership of Boyce & Milwain in 1882. In 1892, the company built an imposing brick building at 66-68 State Street where Boyce & Milwain remained through at least 1946 and possibly as late as 1959. It looks like our top hat was made after 1882, making it highly likely that it is made of plush silk and not beaver.

Why am I even thinking about hats this month? One inspiration is BHA’s spring afternoon tea, a fundraiser featuring delicious goodies and a display and talk about vintage hats. The other is an exhibit I am working on called “All in a Day’s Work: Bethlehem’s 19th Century Makers and Creators.” Inspiration for that project comes from an 1870 gazetteer of Albany County*. While almost every one listed in Bethlehem is a farmer, there are many professions and trades including the blacksmiths, wheelwrights, shoemakers and carpenters featured in the exhibit. There is just one hatter (and farmer) Alexander McAlister. He has an Albany address and farms 2 acres. What I wondered is his story? I could find out very little.

The 1870 U.S. Census has McAlister living in Bethlehem with his wife Mary and three teenage children. His occupation is hatter and his personal estate is worth $1,175. Intriguingly, ten years earlier, the 1860 census places McAlister and his family in Albany where he is a hatter. The value of his personal estate is $5,000. He seems to be doing pretty well for himself in 1860. An 1860 Albany City directory says Alexander McAlister has a business of hats and caps at 428 Broadway and lives at 273 State Street. One wonders what happened in the 10-year span from 1860 to 1870. Unfortunately, I couldn’t find any other records on McAlister after that 1870 census.

Hats. Fashion is ever changing with styles coming and going and coming back again. Top hats and bowlers, boaters and fedoras, baseball caps and cowboy hats. Each has their fashion moment. I’ve been mostly thinking about hatters and men’s headwear. There is also the wide world of millinery. Millinery is all about the business of women’s hats. While that 1870 gazetteer has no milliners in Bethlehem, I did find Miss O. Vincent of Coeymans Hollow, Mary Ann Hagadon of Clarksville and the interesting Sophia Mann of New Salem, milliner, dress maker and “author of Mrs. Mann’s diagram for cutting dresses.” Their stories, and the creative world of women’s hats will have to wait for another article.

*Child, Hamilton. Gazetteer and Business Directory of Albany & Schenectady Co. N.Y. for 1870-71. Syracuse: Journal Office. 1870. You can find a digital copy at Google Books or Archive.org.
Below are some Bethlehem folks wearing wonderful hats.