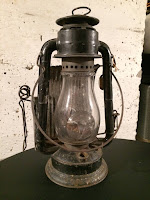 Not so long ago, on a cold January night, our neighborhood lost power for a couple of hours. The scramble for candles and flashlights, the bright circle around the candle flame and the dark corners of the room, got me to thinking about light. It is such a simple thing that profoundly influences how we experience life.

Back in time, the amount of available light controlled every day decisions.  Day light was essential and working “sun up to sun down” was common.  Buildings were aligned whenever possible to take advantage of natural light.  Rooms were painted light colors and work tables placed by windows. Craftspeople knew they could produce more when daylight hours were longer.  Candles were expensive. Was the work worth the candle?

Using candles and burning oil in lamps goes deep into ancient times. In American history, candles, while common and often homemade, were relatively costly.  Less expensive models were made from tallow (various animal fats), more expensive versions were made from beeswax, bayberries and whale spermaceti. Burning candles had to be managed and “snuffed” every few hours for maximum efficiency. To snuff a candle was to trim the wick without actually putting the flame out, unlike how we think about snuffing out a candle today.

Burning liquid fuel for light was common as well.  In 1784, the argand lamp was patented, and said to be the first basic change to lamps in thousands of years.  The argand gave the illumination of six freshly snuffed candles, an amount that some found too bright given that people were used to weak light of candles.  1787 saw another advance in oil lamps called the agitable lamp said to be cheaper than candles.  Notice the name “agitable”, capable of being agitated.  Oil lamps tipping and spilling burning oil was a serious problem.

Both oil lamps and candles were used simultaneously in households before the 1860s.   While tallow was commonly burned, another popular option was whale oil. (The story of whaling ships based out of Hudson River ports is a story for another article.) The advent of cheap petroleum products, especially kerosene, after the Civil War made candles obsolete and drove the whalers out of business.

In the 1800s, with changing society, ordinary people began to want good, cheap and dependable lighting. Gas lighting was making an impact on city dwellers, and improved kerosene lamps, especially those of the Dietz company, were making an impact all over. Electricity, Edison and his lightbulb, would make a huge impact at the turn of the 20th century.

Next time you are “burning the midnight oil” take a moment to be grateful for the ability to flip a switch for an abundant supply of light.  For our ancestors, darkness was real, and quite profound.  For hundreds of years, working and reading at night was accomplished by dim candle light and later in the pool of light from an oil lamp. In 2019, we are more likely to complain about too much light with many working on solutions to alleviate light pollution.  Now, except in the occasional power outage, people control the light instead of the light controlling people. 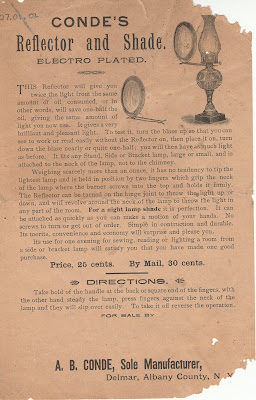 Above is a Conde Reflector and Shade Advertisement. By 1900, Alonzo and Pattie Conde were living on Kenwood Avenue in Delmar. Alonzo had a long career working with metal, including time as the president and manager of the Capital City Malleable Iron Company. Conde’s Reflector and Shade was an item that could be attached to any oil lamp increasing the amount of light given and saving on fuel.  As the ad notes, “It’s use for one evening for sewing, reading, or lighting a room from a side or bracket lamp will satisfy you that you have made one good purchase.” (Courtesy of the Bethlehem Historical Association.)

Here's the link to the current issue!

http://www.ourtownebethlehem.com/
Posted by Susan Leath at 8:45 AM