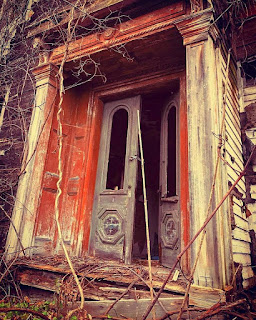 Entrance to Gilbert Wemple’s Mid-1800s farmhouse, Glenmont, NY.
On a high, and long-abandoned hill along Wemple Road sits this resilient Greek Revival home on 112 acres of overgrown pasture and wetlands. This land recently sold for just $250,000, so I expect that soon this majestic ruin is not long for this world.

In the 1860’s, son William worked the farm with him, while his other son John (who served as Bethlehem supervisor from 1875-1876) lived just down the hill toward River Road. By the time John took office, William and his family left his father’s home and started farming elsewhere in the town, and hired a 24-year old servant named Jane Louisa Barkhoff. Louisa never married but at just 17 had a young daughter named Leila, who vanishes from the public record after 1875.
In 1917, Barkhoff bought a large parcel of sandy farmland along Shunpike Road (now Elsmere Avenue) from her aging aunt Emma Bender, whose husband Cyrus was the grandson of Revolutionary War sergeant Christian Bender. It is here the modern history of our home at 116 Elsmere began.
It appears as if Louisa never actively managed our property; she lived in Albany and subdivided a large portion of the parcel just two years later, conveying it to her brother William Barkhuff (he preferred the more Teutonic spelling of their last name, apparently). He and his wife would farm the property and lease portions of it to Albany Sand and Supply Company for molding sand until the onset of the Great Depression. As a young man he worked in the icehouses on the Hudson River and later in life as a florist and caretaker for Bethlehem Cemetery, where he would return to rest forever in 1944. His family home remains intact today at 110 Elsmere, exactly how it looked in his era.
Shortly before her death in 1935, Louisa also conveyed the deed to a smaller parcel of her Bender property to William Gall and his wife. Gall, right off the boat from Germany, ran an auto garage at 124 Elsmere, which no longer exists… but it’s foundation and numerous artifacts are still there in our woodlot.
Interestingly, Louisa retained title to both properties pursuant to a curious stipulation in the 1919 deed, so these lands returned to her estate for probate when she died. She left no will, but another Wemple – Helen Kipp Wemple – was named as her executor CTA to the Madison Avenue Presbyterian Church of Albany. It was the trustees of this parish that sold these lands together to Elsmere Fire Commissioner Carl L. Wehrle, and it was this man that would commission his brother-in-law to clear the merged lot and build the home we live in today.
#ruins #abandoned #history #vanishinghistory
Posted by Susan Leath at 12:55 PM