Oh Delmar, Your Name is Mystery

Bark, bark, bark.  That is me, your town historian barking up the wrong tree for years now!
Did you see the article in today's Times Union about the name Delmar? Hop over and take a look.


The author Larry Rulison and I have exchanged several emails about the name Delmar.  I'm convinced of the railroad angle, he proposed a name after a California resort.  Well, I got another email this morning that introduces the U.S. Post Office into the mix, and I must confess, the evidence here is pretty convincing!


Check out the link below about nineteenth century U.S. Post Offices.  The article makes a pretty clear declaration:


Then there is this newspaper clipping from the Albany Times dated Friday evening, October 2, 1885.


"The postoffice "Adams Station" has been changed to "Delmar" which name it is supposed will also take the place of "Adamsville" as a railroad and express station." 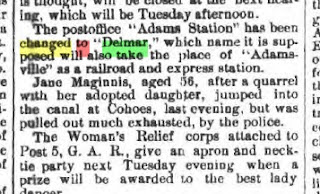 There is also this bit from John R. Adam's obituary published in the Albany Evening Journal in February 18, 1905: It says in part, "Nathaniel Adams, his father,...owned a great  deal of property where Delmar now is and the place was named in his honor.  About twenty years ago the name was changed to Delmar, as there was an Adamsville in Jefferson county and another in Washington county, and mail addressed to residents of these places often was miscarried."


So there you go folks, the name Delmar is the post office's fault.  Thank you Chris Philippo for helping us set the record straight!


But did you notice, we still  haven't answered the question, "why Delmar?"
Larry, maybe it was California!!!
Posted by Susan Leath at 8:20 AM