For the October 2017 issue of Our Towne Bethlehem I wrote about our area's old stone houses, especially those of the Onesquethaw Valley Historic District.   Illustrating the story, and gracing the cover, was this image of the Oliver-Bratt house on Van Dyke Road. 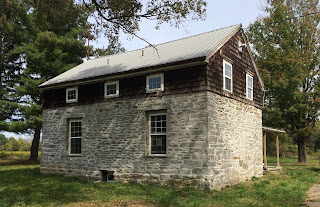 My caption for the photo simply said "The Bratt – Oliver House on Van Dyke Road has undergone many architectural changes over the years.  It is now part of the Spinney community and was once part of the Leonard Farm."

I am pleased to report that a member of the Leonard family, Brian Leonard of North Carolina, reached out to Our Towne with more photos and remembrances of growing up in this home on Van Dyke Road.   I like Brian's way with words, and with his permission, here's his whole letter.  Enjoy!

A couple of weeks before today, Thanksgiving 2017, I was visiting with my dad, Richard Leonard, and he shared a copy of the October 2017 issue of Our Towne that my aunt Barbara had sent to him. What a pleasant surprise to see my childhood, ancestral, home on the front cover.
As is usual for a couple of old men, that led us down a path of reminiscing about the [Leonard] farm. Not that it makes me any more special than anyone else in this world, but the thought of that farm, and how my family’s history was so closely tied to it, always makes me feel like the I am the luckiest man in the world.
Lucky me, I’m the last in line. Quite literally, arguably, the last of my family to be born and raised at 246 Van Dyke Rd.  While the farm only carried the name Leonard for a brief time, beginning around 1920 when my great grandfather Ralph Irving Leonard bought the farm from his sister in law and ending with the sale to the owner’s of Spinney Preserve, it has been part of my larger family’s heritage since the Van Rensselaers were the prominent landholders in the area.
The house, now called the Bradt-Oliver house, (both names show up in the Leonard genealogy) was an absolutely idyllic place for a boy to grow up, and even though I didn’t understand its personal historic significance, I relished the fact that the house I was raised in wasn’t your typical modern home. Add a little over one hundred acres to the scene and it becomes obvious why that place is special.

The old stone part of the house, the original house, caught my great grandfather’s eye and he spent a long time turning it into his dream home with his wife, Lillian Salisbury. Prior to buying the farm he had been a carpenter for the NY Central RR and used those skills, and timber harvested from the farm, to more than double the living space during the 1950’s and early 1960’s. I have heard a few rumors over the years that there are stories of an even older cabin having been on, or near, the house site but no one that I’m aware of has presented any real evidence.
The original part of the house was, as you noted, built some time before 1768, and was a fairly typical pre-colonial Dutch influenced home. A simple rectangle with stone walls almost 2 feet thick chinked with a combination of mud and horse hair. It was built as a single living level split into two rooms, with a haymow above and a cold cellar below.  The floors are all hand hewn tongue and groove with beams that measure better than a foot across. One of my favorite things about “the front room” (our term for the old house) were the twelve over twelve windows. I’ve visited the house a few times over the years since moving away and am sad to see those windows have been replaced. To my own discredit, however, I personally may have had a little to do with that, having broken and repaired several panes during childhood activities. 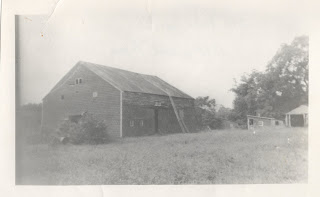 I don’t recall the details but I do recall seeing names and dates here and there on the old woodwork. Though I’ll add the most notable date to me, 1807, was carefully carved in a beam of “the big barn” that once stood on the other side of Van Dyke Rd.
I don’t think I’m alone in feeling that, as youngsters, we all tend to be too busy growing up to notice, or care about, these things. But as I’ve aged I’ve come to see that is something almost all of us look for. Our place. Where we are, where we’re going, where we came from, who our people are.  And that is one of a myriad of reasons why I feel so lucky. Last in line or not, I was given a rare chance to grow up steeped, literally, in my peoples history.
I could go on and on, boring you with stories of life at that end of Van Dyke Rd. Such as how songbirds nesting in the stone walls surrounding my bedroom would wake me, literally, every day an hour before sunrise, or snowshoeing the snow covered fields on a pair of bear paws that “are older than I am” according to my dad. Plus other rites of passage, like the sunny summer morning of my seventh year when my grandfather, Irving Ralph, stuck me on the Ford 8n his father bought new in 1947 and taught me to drive. And for you romantics things like first kisses in the barn’s haymows.           But I digress.
I will close with this thought. I believe we honor our ancestors, near and far, by remembering them. Thank you for taking your time and remembering some of mine.