Thoughts about Glenmont and Frazertown

As often happens after my Our Towne Bethlehem articles are published, new info and insights come out.  Way back in January, I wrote about Frazertown, Glenmont and the Anders Road area.  The Maiers of Anders Road, were kind enough to stop by my office and share some cool things they found in their yard. 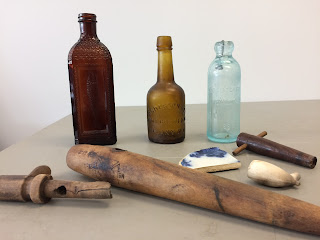 The wooden objects are keg taps or spigots.  The one in the foreground was made by John Sommers. Below is one of their advertisements from 1908, plus, just for fun, the masthead of the magazine it came out of. 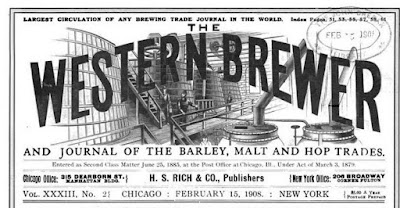 The bottles are fun too.  The dark brown one is for cod liver oil. The middle one reads: Anderson & Co., Home Brewed Ale, Albany, NY and dates from about 1870.  The clear one on the right reads: A.F. Dietz, Altamont, Albany Co., NY and has a picture of a cow on the back.  It dates to about 1888. 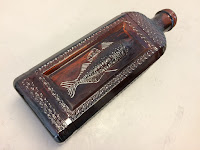 Also in the photo is a piece of blue and white pottery and the bowl of a clay pipe. The pipe is probably from the mid 1800s.


The Maiers also shared a story about the name Glenmont that I had never heard before. They told me that the beginning part came from The Glen, a large estate up on River Road just north of Glenmont Road, and the second part of the name is from The Mont or The Mount, a large estate just up the hill on Glenmont Road on the north side. Put the two estate names together and you have Glenmont. Hmmmmm, could I verify this story?  Well, no.  But the way did lead down some interesting paths.

First up The Glen. Based on old maps and the story told by the Maiers, I think this is a reference to the Hurlbut farm (sometimes spelled Hurlburt), pictured below in a photo I stole from Google.  The book Albany Chronicles describes it as "the country-seat at Glenmont, upon the eminence west of "The Abbey."

In the late 1890s there are a few snippets in the Glenmont section of the Altamont Enterprise referring to Mr. G. D. W. Hurlbut, but I was unable to find any references to a property called The Glen.Here's one of my favorites from March 1899.  Note it refers to another estate by name, but not Hurlbuts. 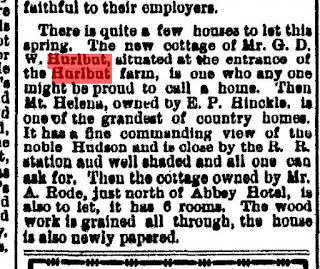 The other property in the story is The Mont or The Mount.  I believe this is the Patterson farm located up the hill from Anders Road off of a long driveway on the right. Conveniently, this property at 111 Glenmont Road is for sale if you would like to spy it out. Top picture is from Zillow.  The bottom one shows the house back in the day and is courtesy of the Bethlehem Historical Association. 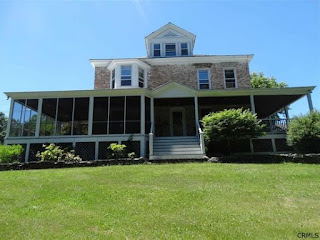 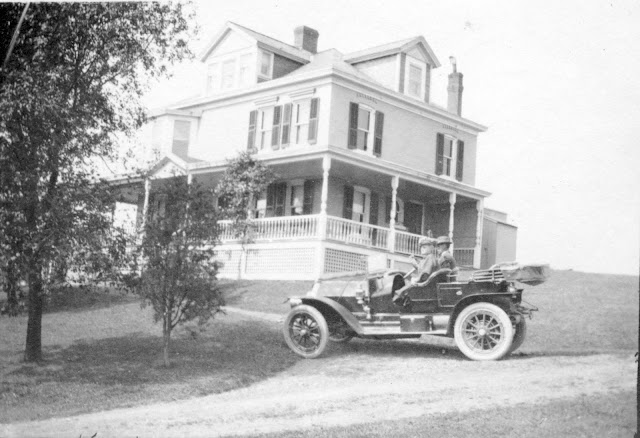 BHA records indicate that this is the Patterson house, Glenmont Hill which matches up with the old maps of the area. The town's OARS system says the house was built in 1901, which lines up with the tenancy of John J. Patterson.  A search of the Altamont Enterprise did not turn up any info regarding a property called The Mount.  I did turn up the tragic story of John Patterson (John J.'s father) and his nephew James Patterson.  Both were killed in September 1898 in an accidental explosion at their stone quarry.

So, I very much like the story of The Glen and The Mont, but so far have not found any primary sources to back it up.  For now, I'll call it plausible but not proven.

And a final note...wonderfully, the 1880 US census has the Frazers, Hurlbuts and Pattersons all on the same page.

Dwelling house 285 is the Fraziers (John and Ann and their daughters Jane, Kate, Mary, Sarah & Elizabeth.)
Dwelling house 286 is the Pattersons (head of household John and his son John J. daughter Louisa Rockefeller and her husband BR, nephew James Patterson, plus 4 other single adult men.)
Dwelling house 293 is the Hurlbuts ( E.P. and wife Catherine, sons Gansevoort and Ernest, plus George Pattendon farm laborer, Catherine Cahill and Elizabeth Callahan domestic servants and Elizabeth Callahn, cook.)
Posted by Susan Leath at 11:42 AM