I wrote recently about buildings in Bethlehem designed by architect Marcus Reynolds. The article ended with the mystery of the Hessberg's home.  Where was it? Is it still there? What happened to it?


A reader commented about the Hessbergs showing up in the 1925 New York census at their residence in Bethlehem on River Road.  (US Census reports consistently show them at their Albany residence.) In the picture below, you can see Samuel and Rose Hessberg.  Scan down and you'll see William H. Weisheit, chauffeur.  Dawn Pratt of the Bethlehem Historical Association responded to that by calling up her friend Bill Weisheit, grandson of William. And, oh yes Dawn tells me, Bill's grandfather worked for the Hessbergs and passed down many stories. 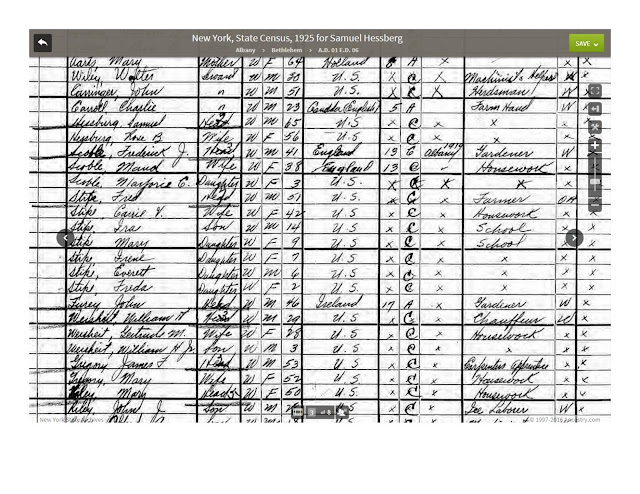 Where was the house? Turns out it was at the location of today's Job Corps, on River Road, the former Our Lady of Angels Seminary.  The seminary was opened by the Vincentian Fathers in 1961. They built a very modern facility devoted to the training of parish priests. It closed in 1972, and, after much local controversy, Job Corp opened in 1977. Job Corp is a federal operation that provides residential vocational training.

Samuel Hessberg died in 1931, Rose in 1953.  I don't know when the property passed to the Vincentian Fathers.  The house was likely torn down to make way for the seminary buildings.


Previous to the Hessbergs, Allison Bennett notes that the Job Corp property had been owned by Van Wie family and that an early, brick, Dutch style house had been there. Her article, dated 1964, says the circa 1732 house was long gone.  A Van Wie family cemetery is still there with 13 interments dating from 1820-1871.


So, thank you Dawn for following up.  She's even got a line on a picture of the Hessberg house - supposedly Job Corp has a photo.   Stay tuned!