Here's a fun old snapshot to liven up your Tuesday morning.

Harry Paige grew up on Rural Place and Douglas Road.  He graduated from Bethelehm Central High School in 1941.  That's Adams Hardware Store, A.K.A. I Love Books in the background. 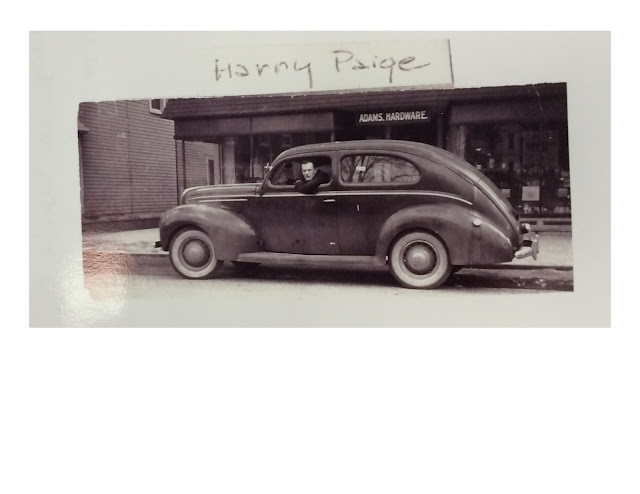 UPDATE: I just received this letter from Harry Paige's daughter Sandy Sorell who shares her father's memories of his live in Delmar.  Posted March 6, 2019

I was recently at the to visit my father’s memorial stone and to reflect.  My sister and I purchased the brick for Dad a couple of years before he died.  He was very proud of that gift.  After a quiet visit I sat down on one of the benches and remembered…

My Dad was Dr. Harry Worthington Paige (1922-2003).  He grew up in Delmar as part of the Greatest Generation, graduating from (class of ’41) when it was located on --the building that is now the Middle School.  As a young kid he and his sister Jeanne (Martha) Paige lived on near the Restifo family.  When Dad was 16 and Aunt Jeanne 15 they moved to the new family home at .  This house remained the Paige family home until 1996 when my grandmother, Ruth Converse Paige, died at the age of 99½.

Dad was a writer and a storyteller, and he talked often about growing up in Delmar.  His childhood was a magical one full of fun, friends, and innocence.

As a kid Dad’s fun consisted of playing with his Yo Yo, shooting marbles, collecting stamps and baseball cards, reading “big little books,” riding his bike, and playing games like “Kick the Can” or Dodge Ball in one of the many open lots in Delmar.  Climbing trees was another favorite activity, especially since Delmar was densely wooded in the 1930s and 1940s, before the migration to the suburbs and the building boom.  He, like many of his friends, was a Boy Scout, and that occupied a good deal of his time.

Dad was a prolific writer.  He told me that he sold his first story when he was 12, during the Depression era.  He said he felt very guilty accepting money for the sale as so many men were out of work, and families were going hungry at the time.

Life was relatively simple when Dad was growing up.  A Paige family excursion to Warner’s for a picnic and swim on a hot summer day was considered a real adventure.  I remember hearing the story about my grandfather, Montfort (Monty) Paige, a notoriously slow driver, receiving a speeding ticket on one of the family day trips up into the Helderbergs.  He was mortified.  An occasional trip to Hawkins Stadium to see the Albany Senators baseball team was a big deal too.
Then there were summertime excursions to Mid-City in Menands near where Montgomery Ward used to be in that massive building on Broadway.  He would take a red and yellow United Traction Company bus there to enjoy the park and cool off in the large pool.

Dad went to the when it was a brand new school.  His mother, a former Latin teacher and graduate, was a member of the PTA there.

Of all the stories Dad told, the most vivid in my mind were of his days spent at his beloved alma mater, Bethlehem Central, where he met my mother, Ruth Killough (class of ’42), an accomplished athlete and field hockey star.

Dad’s best friends were named Prue, Van Zandt, Chesbro, Isdell, Oliver, Hartzel, and Murray.  There were other names too that I’ve forgotten over the years.  Some 20 years and one world war later, quite a few of Dad’s buddies returned to the Delmar area to live, work, and raise families.  Some of their children became my classmates at Bethlehem Central in the 1960s.

I remember Dad talking about his buddies: (First name unknown) Leonard who was an exceptionally brilliant man with a love of science or mathematics, Jesse Turner who was our Delmar mailman for years, and Robert Wright who founded Wright Trash Disposal.  Years later the consensus was that Mr. Wright was the richest person to come out of BC during that era.  I also believe Dad went to school with a George Butler who when I was in high school, could be seen on any given day riding his bike around Delmar.

Dad said there were plenty of pretty girls at BC back then, including my aunt Jeanne Paige and her best friend Janet Flume Jones.  Dad talked about a Betty Barker and Snookie Lansing.  I also recall the names Hicks, Hafley, Ardizone, McCormick, Bennett, and Weaver.  He told a funny story about taking classmate Eva Marie Saint (yes, the actress) to a dance with her perched on the handles of his bicycle.  He said her sister was a beauty and that she had tried out and been selected for the senior play while her sister Eva didn’t make the cut.  (Later Eva won an Academy Award for her unforgettable performance in On the Waterfront.)

Dad always talked about his high school friends as if it were yesterday.  His class remained extremely close over the years due to Delmar’s relatively small size and also the shared experience of war.  Dad was a “5 Year Man” in high school, graduating a year later than he should have due to lengthy absences from school to play competitive tennis.  He was an accomplished player (his father was a tennis professional), and he was very active on the regional junior circuit.  I have his postcard postmarked The Sagamore written to his parents when he was in high school telling them he had just won his tournament.  The family tennis trophies and related memorabilia were donated to the Albany Institute of History and Art.

I recall Dad talking about shooting darts in the back room of the DT (Delmar Tavern)—later Brockley’s, then Beff’s, and now Swifty’s.  He and his buddies liked to have a few beers, and one night his friends thought it would be funny after Dad had had a few too many, to leave him in a shopping cart on his front porch.  They rang the doorbell and took off leaving Dad to face the consequences.  Another “prank” I heard about was “borrowing” a Delmar policeman’s gun and running it up a flagpole in town.  There was another story too about Dad and some of his friends turning on a garden hose and sticking it in an unsuspecting Delmar resident’s open cellar window.  I am not sure what the outcome was there.  All of this seems pretty innocent by today’s standards.

Another popular hang-out for teenagers was Pop Libby’s which I believe was a soda fountain near the .  Movies were very popular then and kids would go to the Palace in Albany or Delmar’s own theater--“The Stink” as Dad said it was nicknamed, located near where D.A. Bennett’s was.

Mom grew up at playing in the wooded lots with neighborhood pals Scotty Rowe and Earl (Buster) Jones.  Scotty’s dad was Alton Rowe, Delmar businessman, for whom was named.  He founded Delmar Lumber and was the builder of the Killough family home at .  Rowes lived on the corner of and Roweland across from a large wooded corner lot.  I remember my maternal grandmother, Harriet Abriel Killough, talking about taking the United Traction bus with her friend Mildred Rowe, ’s wife, into downtown to enjoy a chicken salad lunch and whiskey sour at the venerable Keeler’s Restaurant.

Mom was focused on sports in high school, especially field hockey.  One of her coaches Miss Johnson, was a mentor and life-long friend to her.  The students called her “Mike.”  Mom’s best friends were Connie Conroe, Ruth Cassavant, and Ginny Arnold.  (Ginny later married Dad’s good friend Jack Van Zandt.)  I remember Dad telling me Jack’s brother was one of the first casualties of World War II, dying in a training mission.  I met Jack and Ginny’s lovely daughter a few years ago when she made the trek up from to research the Arnold & Van Zandt family histories.

Dad told me that when the War came, and he and his friends were far from home, any news from or about Delmar boys was filtered through Agnes Leonard who lived on .  He said she was much beloved, and everyone called her “Ma” Leonard.  There is a wonderful picture of Dad and a group of his high school buddies all dressed up in sports coats posing together just before they went off to war which I donated to the archives.

Mom and Dad’s high school classes remained close throughout the years.  On the occasion of Dad’s 50th  class reunion (1991), he wrote a beautiful piece as a tribute to his class.  He continued to see a few BC friends throughout the rest of his life, but he was always left drained and saddened to see his buddies getting old.  It reminded him too much of his own mortality.  He preferred to remember his BC classmates the way they were way back when, with all the exuberance of young kids with futures stretching out before them like the endless horizon.

We buried Mom and Dad in the at Kenwood and Elsmere on a knoll overlooking the athletic fields of what was their beloved Bethlehem Central.  We visit them often.

1) Most of Dad’s childhood memorabilia and other family records were donated to the Bethlehem Town Historian’s Office for preservation.  In addition to the group picture mentioned above, there is a great picture of Dad leaning out the driver side window of a vintage car in front of Adams Hardware, one of Mom and Dad at a BCHS dance, and a greeting card signed by Adelaide Saint.

2) For curious readers, my father served in the U.S. Army Air Corps during WW II, graduated from in 1946, and later went into college teaching.  He spent most of his career in the Humanities Dept. at (1952-60 & 1966-88) in upstate .  Upon retirement he was named Professor Emeritus.  But Dad’s true loves were tennis and writing.  He was a tennis professional and an award-winning author, continuing to write up until his sudden death in 2003.  My mother (1925-2008) graduated from SUNY Cortland and became a physical education teacher, retiring from St. Lawrence Central in . 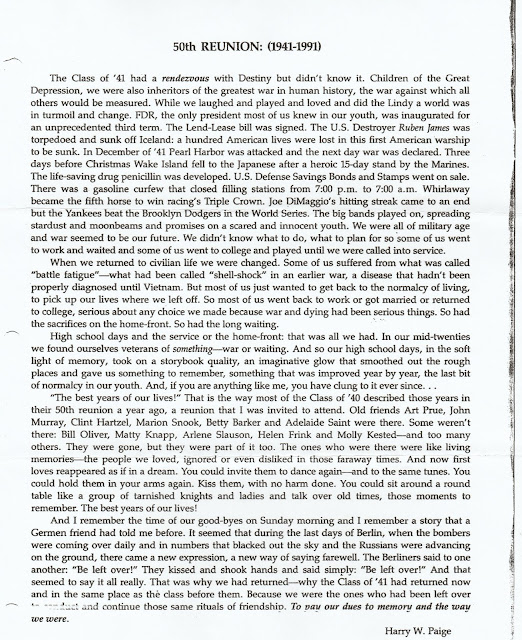