Ben's Bridge - who is Ben and why is a bridge named after him?

I hope you have had a chance to read my Our Towne Bethlehem article about the Selkirk Rail Yard. If not, here's a link - go quick because a new article will be up for January.  http://www.ourtownebethlehem.com/

The cover photo is of a young girl on Ben's Bridge.  As I type this, the bridge that carries Old School Road over the rail yard is coming down and the legacy of Ben Giovannetti will be lost.

Old timers remember it being called Jericho Bridge.  While the Jericho place name is no longer recognized, the little hamlet once boasted a small community of farm families and a one room school.  Today's Jericho Road, Route 53, once continued from 9W over the bridge and on to South Albany (another little recognized hamlet) and South Bethlehem. You can follow Rt 53 on a modern map connecting Jericho Road, Old School Road, and South Albany Road.

In the late 1980s and early 90s there was an effort to close the Jericho Bridge, and a counter movement by residents to keep it open. The bridge was saved. and in 1993 it was renamed  to honor Ben Giovannetti, unsung bridge hero. 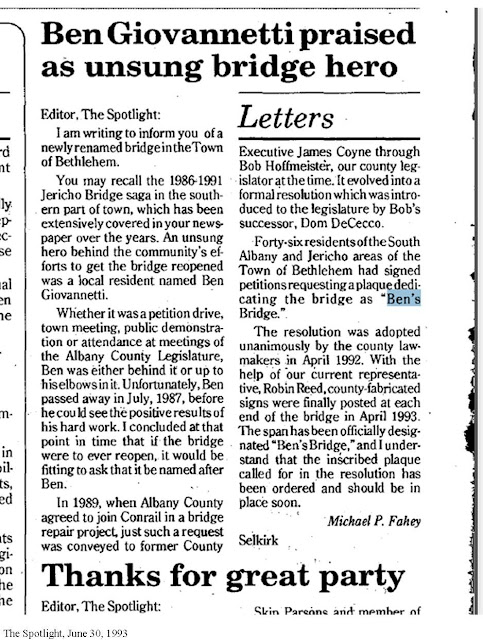 To read more about the controversy, pop on over to the Spotlight archive at the Bethlehem Public Library and search on "Jericho Bridge"
http://www.bethlehempubliclibrary.org/localhistory/spotlight.asp

Sadly, just 25+ years later, despite the objections of many, Ben's Bridge will shortly, if not already, be no more.  Curious? Check out the I Care About Ben's Bridge Facebook group for photos.