I don't know how you are spending your time on "pause" but I had fun over the weekend doing some genealogical sleuthing into my own family tree.

It all started with a letter in which "old uncle E. Murdock" advised his "worthy nephew" to not go to California because her "golden sands" and placer mines were "exhausted entirely."

It was intriguing right off because of the Gold Rush connection.  Back in 2015 I wrote about my ancestors, the Todd brothers of New Boston, New Hampshire, who went off to California and the Gold Rush. https://bethlehemnyhistory.blogspot.com/2015/01/gold-rush-and-bethlehem.html  I have several of their letters and thought this was more of the same, except, there are no Murdocks at all in that New Boston family tree - not that I was aware of.  And who is the worthy nephew or the aunt Hannah Corthell?  Sleuthing was required.

Here's the transcript of the letter. 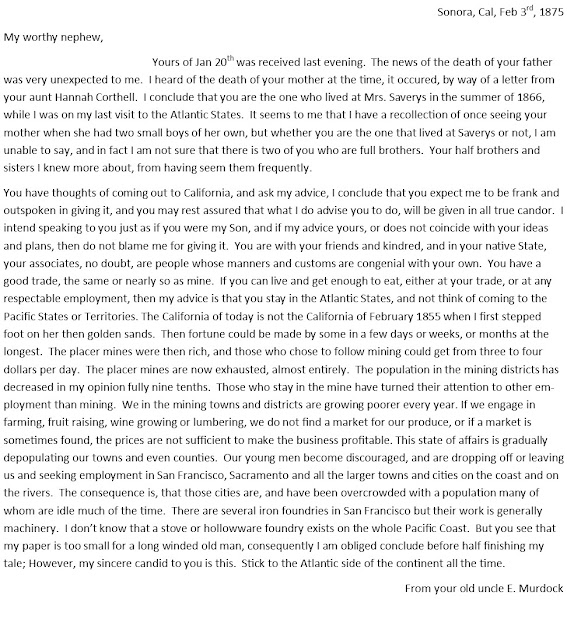 First, I looked in the US Census for E. Murdock in Sonora, California, which turned out to be in Tuolumne County.  There is only one that is likely mine, Elijah Murdock, who in 1860 and 1870 is a miner and in 1880 is a clerk in a grocery store.  He is consistently noted as having been born in Massachusetts.  Then it was off to Findagrave.com where I found him buried in Sonora Odd Fellows Cemetery with his dates 1817-1892.  Finda lists his parents as Elisha Murdock and Martha Murdock and says he was born in Carver, MA.  Eureka! I have a ton of ancestors from Carver, Plymouth County, MA.

So, I followed a whole bunch of Findagrave connections from Elijah's parents, to his sister Lydia Murdock Shaw to her daughter Elizabeth Shaw who married Tillson Atwood. Now Tillson's first wife was Ruth Atwood and Ruth and Tillson had a son named Charles who is my great, great grandfather.  But technically Charles is not a Murdock.  Elizabeth Shaw Atwood is his stepmother, making our letter writer, Elijah Murdock, his step-uncle.

Did you follow all that?  Because in writing his letter, I don't think old uncle Murdock even knew which nephew he was writing to!

Besides Findagrave, facts that confirm this connection are

2. The simple fact that I have the letter which is amongst of ton of my great grandmother's memorabilia - Emma Elizabeth Atwood Todd Saunders. (Side note, she married Charles D. Todd whose uncles went to California for gold.)

And 3 - because of a spoon.  Really.  Years ago in my genealogy database, I had written a note under Elizabeth M. Shaw Atwood's entry that reads "I have a spoon with a note written by my grandmother that says her mother's grandmother was Elizabeth M. Shaw Atwood which is where we get the family name of Elizabeth."  Now I know what that M stands for - Murdock - and what the M is on the old silver spoons I have.

Oh and in the letter, did you catch the name Aunt Hannah Corthell?  From the census and Findagrave I was able to deduce that this is Hannah Cobb Shaw who married Sherebiah Corthell.  Hannah, I am pretty sure, was Oliver Shaw's sister.  Oliver married Lydia Murdock who is our letter writer's sister.

So there you have it, successful sleuthing.  And I hope you enjoyed the advice about not going to California in 1875.  Charles heeded the advice to "stick to the Atlantic side of the continent all the time." He remained in the Plymouth County MA area his whole life.  He was a veteran of the Civil War, and he married Naomi Ripley in 1864. They had 6 kids together.  He died in 1895 and is buried in Central Cemetery in Carver, MA.

Here's a picture of Charles followed by pictures of the actual letter. 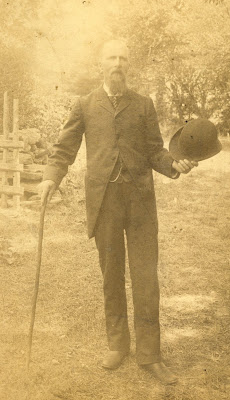 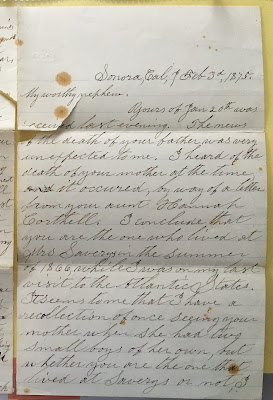 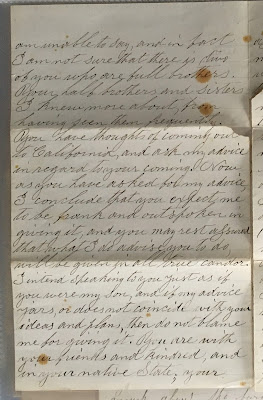 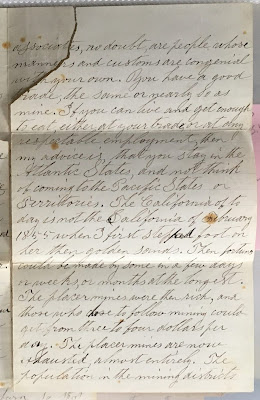 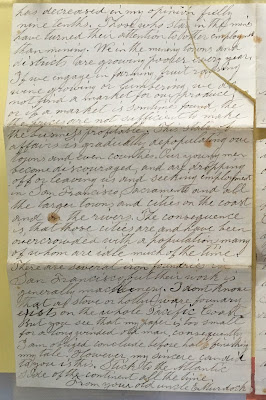