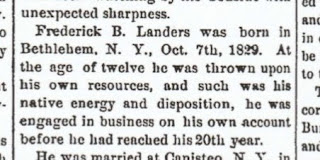 "At age twelve, he was thrown upon his own resources"

It is often the random historical inquires that keep this historian's job interesting.  Not too long ago I was asked about the Landers family in Bethlehem, specifically Frederick Becker Landers. You'll notice right away the Becker name, locally famous at Becker's Corners and the Becker Elementary School. It turns out there was another group of Becker family farms near where modern day Elm Avenue and Rt 32 cross. There was also a Becker family burial ground there which has been subsumed by 32.  But first some maps. 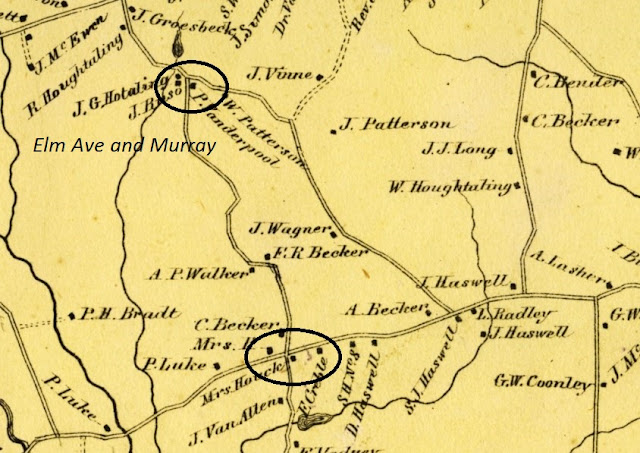 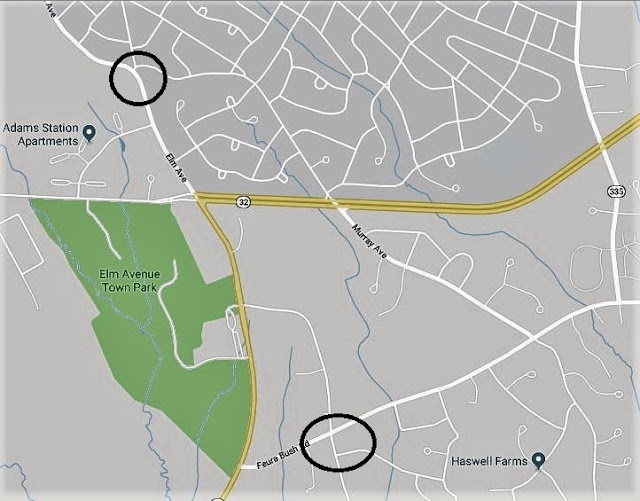 Ok, now you know the area we are talking about, look at the page below from "Records of the People of the Town of Bethlehem" about the Becker Family Burial Ground. 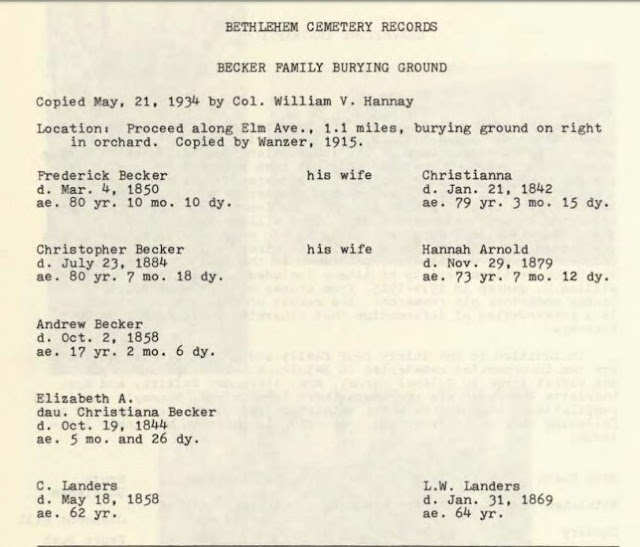 The location is right about where F. R. Becker is on the 1866 map.  And low and behold, at the bottom are two members of the Landers family, "C" and "L.W."  We've got a Becker-Landers connection.

Also recorded in the "People" book is the July 4, 1825 marriage of Laurence W. Landey to Catharine Becker at the First Reformed Church of Bethlehem. This is likely the LW and C listed above - I'm thinking the name was misspelled or mis-transcribed in the church record.

So, how does all this connect up with Frederick Becker Landers? Well, we know he was born October 7, 1829 in Bethlehem, New York. Maybe, just maybe, Catherine and Laurence are his parents but we haven't found any records to attest to that. Maybe he was born on the Elm Avenue farm, but that is just supposition.

The newspaper clipping above is from his 1887 obituary in the Decorah Republican.  That is Decorah, Iowa. My inquiry came from the folks at the Winneshiek County Historical Society, the proud owners of the Landers-Adams-Bodensteiner House in Decorah.  Did we know anything about Fredierick who left Bethlehem at age 12 to make his way in the world?  No we do not, only the supposition that his parents' burial spot is now under the Delmar By-Pass.  Not a thrilling moment for your Bethlehem historian.

I very much enjoyed reading about Frederick Becker Landers in his obituary. He seems to have led such an interesting life. But the mystery of his Bethlehem connections have to will remain.

Below is a transcript of his obituary.

Again, we are called upon to record the passing away of another old resident and active business man.

When it was written last week that F. B. Landers was “just the same,” it was not exactly true. There seemed to be evidence e that to his family gave some hope.  But it was only the flicker of the lamp of life just before expiring.  Although it has been an event considered probable for weeks it came to those who had been watching by his bedside with unexpected sharpness.

Frederick B. Landers was born in Bethlehem, N.Y., Oct. 7th, 1829.  At the age of twelve he was thrown upon his own resources, and such was his native energy and disposition, he was engaged in business on his own account before he had reached his 29th year.

He was married at Canisteo, N.Y., in 1850 to Sarah W. Mulhollon, who survives him.  To them ten children were born, five of whom are living.  It was noted in the funeral discourse, most beautifully, that in his death the family was evenly divided – one half in this life, and the other in the future.

Business ventures in the east proving unfavorable, in 1854-55 he came west, and for a year he was in the employ of P.H. Conger & Co. of Dubuque. During the year he made arrangements to come to Decorah and entered into partnership with McHenry, Packard & Co.  After a couple of years an association was formed with D. B. Ellsworth, and for long years the firm of Ellsworth & Landers, occupied the leading position in our mercantile life.  Later the firm became that of Landers & Son, remaining such until his business career was terminated.  For over thirty years he had been an important factor in the business life of this city.  During that period, he performed more hard labor than most men crowd into a life of three-score years.  He was a natural trader – a born merchant; possessed of boundless energy, and a love for work possessed by few, he prosecuted his business with remarkable vigor.  At times he carried loads which would have crushed other men; but he did it with a buoyancy and courage which was truly wonderful. He has been known to say that he did not know what tire was.  In his disposition he was liberal and progressive, always willing to bear his share of public burdens.  While always interested in political affairs, he never desired official position.  As a husband and father, he was liberal to indulgence.  The funeral service was held at the family residence on Sunday afternoon, and was attended by one of the largest gatherings ever seen in our city – Rev. Willard officiating, assisted by Rev. J. M. Ferris.  Thus, one by one, the ranks of our oldest business men are being depleted.  The pioneers are going to the long home, leaving vacancies behind them which may not be easily filled.