Sometimes I wonder if I am simply curious or just plain nosy.

Last week I visited a Delmar estate sale on Gardener Terrace.  The house was an interesting bungalow and I could tell right away an older woman had lived there and that she was a cat lover.  As I was checking things out, this photo caught my eye.  Aren't these kids cute?  It was 50 cents, so I picked it up. 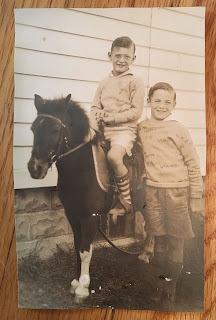 Later as I investigated the basement, there was another small pile of pictures. Again, 50 cents each, so I picked these up and wondered isn't that the same kid in the pony picture? 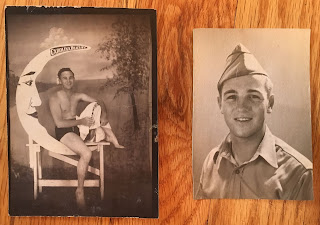 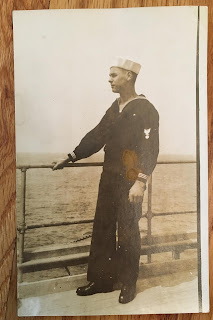 The garage/shed building out back was fascinating too. These drawings on the wall caught my eye. 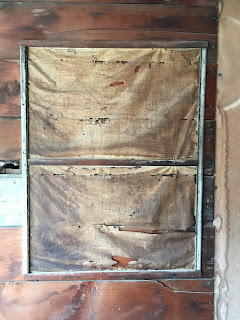 Turns out these are the plans for the house, dated 1926, and completed for the Van Liew family.  How cool is that?  Unfortunately, the name of the person that drew up the plans was obscured.  Here's a close up of the front elevation and a picture from Google Street View (dated June 2011) 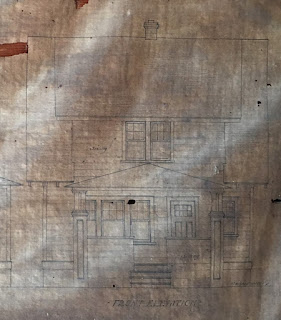 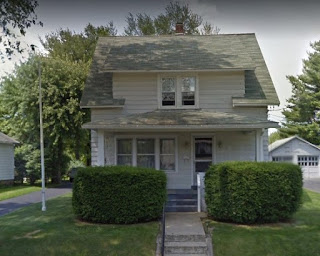 This is where the curiosity takes over. From what I could piece together, this was the home of Roland and Bertha Van Liew.  Roland was an electrician later working for G.E.  They had three children, Roland, Clifford and Thelma.

In the pony picture, I believe Clifford is on the pony, and that is certainly Roland standing next to him.  Clifford died tragically in 1943 at the age of 17 after being hit by an automobile near the Blanchard Post in Elsmere. His father, Roland, was an active member of the post and Clifford was part of the Drum Corps.

Roland, the son, entered the U.S. Army shortly after graduating from Bethlehem Central in 1942.  In the right hand picture above, Roland is shown in uniform and the back of the photo is inscribed "1944 Camp Chaffee Arkansas."  The photo of him at the beach is inscribed  "3 June 44" and he is sitting on a beach chair at Carolina Beach, N.C. Which makes sense because his father's obituary (he died just a few months after Clifford) states Roland was of Fort Bragg, N.C.

The picture of the young man at the rail of the ship is most certainly the father Roland Van Liew. When I took it out of the picture frame, it turned out it was a postcard.  Written on the back is "Taken at sea just after captains inspatection June 10, 1919."  Stamped below that are the words R. VAN LIEW  U.S.S. ZEELANDIA

One snippet I found about Bertha Van Liew was the fact that she was in a bad car accident in 1950 when the vehicle she was riding in was hit by a train while crossing the tracks at Gardener Terrace.  Two other women passengers were killed, but she survived.  That accident led to the closing of the grade crossing there.

And finally, daughter Thelma graduated from Bethlehem Central in 1949.  Her yearbook says her goal was to become a "comptometer operator."  Which is fascinating because at the estate sale, there was a vintage check writing machine and two boxes of computer punch cards.  I wonder what Thelma did for a living all these years.  Her obituary from February 2019 is very nice but short on details.  "She will be greatly missed for her sweet, friendly disposition, easy smile and concern for animal welfare."  Below is her yearbook picture. Thelma I wish I could have met you.