"Onion Soup and Hozi Moi" How is that for a crazy name of a blog post?

I will get to those two intriguing topics, but first...

It has been a while since I posted here! A bunch of stuff has been going on, mainly I was working on my new book, Bethlehem People and Places, which might (might!) make it out by Christmas.  I am publishing with Troy Book Makers and will certainly keep you posted!  Also fermenting in my mind  is the proposed development in Slingerlands at the former Mangia property.  Fermenting is a good word because the topic is stewing around in my head.  The best way I can handle that is to write something up, which I will do soon and post here as well as send to the Planning Board.

Ever heard of the Lyons Avenue Onion Soup and Marching Club? Nope me neither!

This funny inquiry came to me via Justin in the Building Department.  He happened to notice the above on a Delmar building plan.  It turns out that the Lyons Avenue Onion Soup and Marching Club Incorporated is recognized by New York State having been formed June 13, 1958.  In fact, the NY Department of State database currently lists them as active!

A group of neighbors on Lyons Avenue got together in the 1950s to purchase three acres of land adjoining their homes. They created a recreation space that included picnic facilities, a basketball court and baseball field.  There was even ice skating in the winter.

As the article below states, the name of the club "radiated" from its members.  "The entree to our picnics is always onion soup, and our kids enjoy marching and carrying the flag on July 4."

I'm not sure when the club disbanded.  As late as 1985, when the above survey was made, the group still owned the land.  A check of current property records indicates that the land is now in the hands of abutting property owners.


Now what about Hozi Moi?

This caught my eye when a friend posted the announcement  below on Facebook asking if anyone had heard of Hozi Moi.  Of course, I had to see what I could find out.  Google was stumped and I finally found some info at the Old Fulton newspaper website. 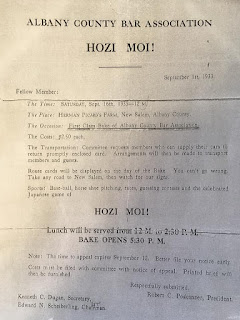 In the 1930s, the Albany County Bar Association hosted outings to Picard's Grove in New Salem. The above invite highlights the clambake and SPORTS: Base-ball, horse shoe pitching, races, guessing contests and the celebrated Japanese game of Hozi Moi.

What is hozi moi? Everyone was curious, but the attorney's of the Albany bar were less than precise in their answer. As the article below says...

Edward N. Scheiberling, clambake chairman, was asked and he said, "Ask Bob Poskanser. He has the rules."

Bob Poskanser, president of the County Bar Association spoke right up like a hostile witness.

Are we all clear yet?  Subsequent articles (there were only 7 of them on the website!) imply there is a large, dry playing field and in subsequent years it was cancelled because of wet conditions.  In that article, the attorney's also tossed out the idea of having parachute jumping contests.  Methinks the attorneys are making stuff up and having fun folks.

Are there any Albany County old timers out there that remember the Bar Association outings? I would love to hear from you!