I've been hanging out at the Delmar Farmer's Market the last couple of Saturdays with the good folks of the Bethlehem Historical Association.  I enjoy talking about our history and  listening to people reminisce about growing up here.  I'm often asked if I know anything about specific houses and wish I had old photos of each and every one. Sometimes, people like to play stump the historian, which I must confess is often too easy to do. 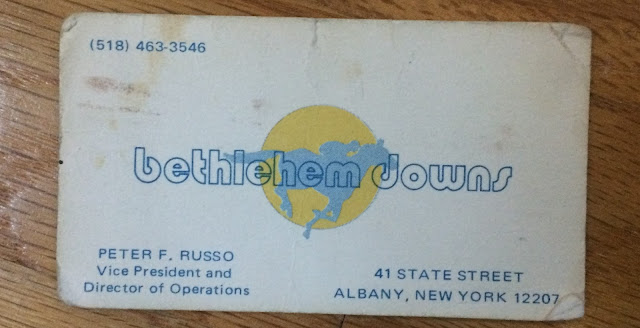 So of course, this afternoon I had to do a little newspaper sleuthing.

Turns out in 1972, Charles Russo and his son Peter proposed the Bethlehem Downs quarter horse track.  They said it would be the "plushest" in the racing industry. They held a ground breaking in June of 1973 and one newspaper reported plans for a $200,000 purse.  Unfortunately, the Russo's plans don't seem to have come to fruition. The Ravena News-Herald, in February 1974, reported that Dawn Branstrom was enjoying her new quarter horse, a Christmas gift from her parents.  They go on to say, "We don't know if she is getting ready for Bethlehem Downs when and if it opens, but we do know she is going to be one of Selkirk's most ardent horsewomen."  The latest newspaper article I found is from March 1976 when the Jigger Sports columnist (in the Leader-herald of Gloversville) reported on the Down's financial struggle and complications of getting the track off the ground.

Seeing as how this is an article about quarter horse racing, hop on over to the American Quarter Horse Association website for some info on quarter horse racing.  As they say, "Quarter Horses are traditionally short, stocky horses that are specialized sprinters.  They are the dragsters of the horse racing world."  Pretty different from the long legged darlings of Saratoga!

PS Thank you Bill S. for this fun round of Stump the Historian!
Posted by Susan Leath at 2:03 PM