A friend of mine let me borrow the abstract of title/deed to her property on Adams Street.  It traces her small suburban plot back to two large tracts of land leased by the patroon.  One is 162 acres leased by Stephen Van Rensselaer to Garrit Walley on March 8, 1793.  The other lease is dated May 9th, 1803 and is between Van Rensselaer and James McKie. 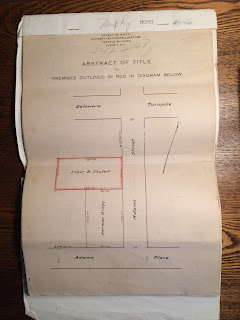 The McKie lease was assigned to Nathaniel Adams (a familiar Delmar name) in 1854. "thus Nathaniel Adams became seized of the parts of said land lying South of Delaware Turnpike and West of New Scotland Road, and as he acquired also the leasehold title, the leases were extinguished, and he became the owner in fee of said premises."

Are you with me so far? The deed describes the tracts with links, chains and a pitch pine tree. It cites the annual rent for both properties in bushels of wheat, fat foul and a day's service with carriage and horses.  All pretty straight forward stuff.


But did you notice the really intriguing bit? McKie's lands are west of New Scotland Road. Moreover, the first line of the abstract (this section was completed in 1912 by E.W. & E.B. Rieck, Attorneys at Law.) states "I am informed that the distance from the center of the New Scotland Road to the West side of Adams Street on the South line of Delaware Turnpike, Delmar, N.Y. is 584 feet."

And then there is this map.

Apparently, back in the day, what we know as Kenwood Avenue, was New Scotland Road. I did not know this - a new history fact!

I think the Riecks were confused as well.  Otherwise why start with that info about the distance to New Scotland Road?  On Google maps, you can measure the 584 feet and it puts you pretty squarely on Kenwood Avenue.  Very cool!  Sadly, the old maps do not have a lot of street names.  I did look in the Family directory of Delmar, published in June 1913, and there is no New Scotland Road in Delmar, just Kenwood Avenue so I don't know when the switch over took place.

Another fun aspect of this document is the restrictions placed on the lot when it was subdivided out by the heirs of Nathaniel Adams in 1912.

"Subject to restrictions that the parties of the second part will not sell or permit to be sold upon the premises and spirituous liquors, wine, beer, ale, porter, cider or any other intoxicating drinks, nor use the premises for any other purpose than for a residence or dwelling, and to erect a house to cost not less than $2000 and to set same at lease 32 ft. from Adams St. and to set outbuildings not nearer than 50ft. from Adams Street. "

What a fascinating glimpse into Bethlehem history!