100 Years Ago Today the U.S. Entered World War I

The Bethlehem Historical Association has published a special edition newsletter commemorating the U.S entry to World War I which was 100 years ago today, April 6, 1917.  Head on over to their website, bethlehemhistorical.org , and look for the DOCUMENTS tab at the top.

So never mind the link to BHA website - I am having trouble getting the PDF to load, really not tech savvy here - but I wanted to publish this blog post on the actual day - so I am publishing it - and will fix the link to the newsletter as soon as I can! 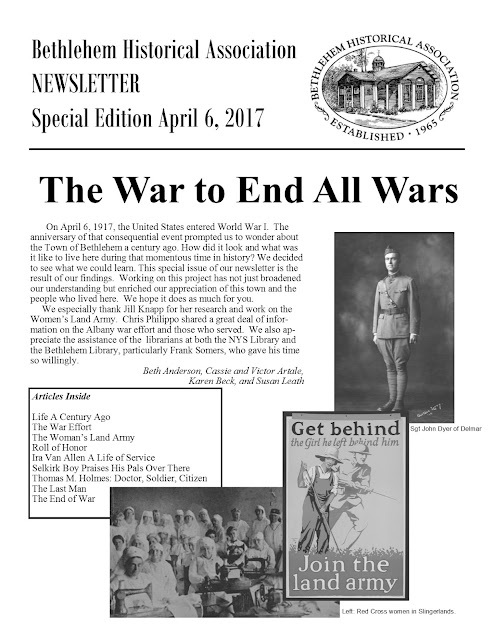 Also, there is a great round up of World War I info in today's Times Union newspaper.  Here are a couple of links.

And finally, below is the article I wrote for the February 2017 edition of Our Towne Bethlehem that takes a look at John Dyer, a Bethlehem veteran of the war.

I often close these blog posts by saying "Enjoy!" but that doesn't really work for today's post.  So, I think I'll end with BHA's motto: Live for Today, Dream of Tomorrow, Learn from Yesterday.


Bethlehem During World War I
A Look at John Adams Dyer

100 years ago in April, the United States of America entered World War I. Centennials such as this offer a time to pause and reflect and wonder about our local history during a transformative era in American history.

Perhaps you’ve heard of Nathanial Adams Blanchard?  The Blanchard Post in Delmar is named after him and every year before the Memorial Day Parade, the members of the post lay a wreath at his gravesite.  Blanchard, son of Grace Adams and Clarence Blanchard, was killed in action in France on November 9, 1918, just two days before the armistice of November 11.  But have you heard of his cousin, John Adams Dyer?  His story too has a tragic ending.

John Adams Dyer is the son of Jessie Adams (sister of Grace) and Zeb A. Dyer.  The couple married in 1889 and their son John was born in Delmar September 24, 1891. Zeb was a prominent lawyer active in the Democratic party and elected Albany County District Attorney in 1899. He died of typhoid fever at the age of 43 on September 18 1904.  John was not quite 13 years old.
The Dyers lived right next door to the Blanchards on Kenwood Avenue in the heart of the Four Corners.  One can imagine the cousins, four years apart in age, hanging out together. Dyer went to the Albany Academy and was on the baseball and hockey team. His time there, with the academy’s emphasis on military procedures and training in leadership, would have served him well after his enlistment. When he filled out his Draft Registration Card, Dyer listed his place of address as Delmar and occupation as automobile salesman with H. E. Lishman in Troy, NY.

Congress declared war on Germany on April 6, 1917, but it took time for the U.S. to gear up.  On June 26, the first 14,000 troops arrived in France to relieve the war battered soldiers of France and Great Britain.  It wasn’t until the summer of 1918 that U.S. troops arrived in Europe in large numbers. The Selective Service Act was enacted in May of 1917.  From these registrations, the U.S. military built up and by the end, over four million people had been mobilized for the war effort.  John Dyer was among the first rounds selected for Albany County.  On September 8, 1917, he was inducted at Delmar, and he and other Albany County men soon found themselves on a special train bound for Camp Devens in Ayers, Mass.

Camp Devens was the regional cantonment set up to train the draftees.  Dyer was assigned to 76th Division of the National Army, Company L of the 303rd infantry.  By the time his unit was sent overseas on July 7, 1918, Dyer was a Sergeant.  The 303rd was part of the American Expeditionary Forces.  Reportedly, the 76th was assigned to a depot division at St Aignan, France and the division was soon broken up with cadres of soldiers going to the front to replace and relieve those already in place.  One source for the 76th division “battle honors” lists the St. Mihiel Offensive, a successful drive by General Pershing’s forces against the Germans.

Here we lose track of Dyer specifically.  Was he assigned to the frontlines in France?  Did he experience the horrors of trench warfare? The blasts of artillery? The fumes of mustard gas? The death and destruction? We simply don’t know.  His record indicates that he served overseas from July 7, 1918 until July 9, 1919.  At the time of his honorable discharge on July 30, 1919, he was a Second Lieutenant. Dyer then came home to Delmar, and lived with his mom.

We know he continued as a car salesman, and later was a salesman for Dearstyne Brothers, purveyors of fine cigars.  He was a member of the Masters’ lodge of Masons, the Knights Templar and the Shrine.  The local newspapers have a few mentions of Dyer after he came home from the war.  In 1922, he helped organize a social for the Delmar Democratic Club (a concert and dance at the Delmar fireman’s hall). In 1923 there is a mention of his name in a long list of attendees of a Tawasentha Chapter DAR card party and dance also held at the Delmar firehall. And then there is this headline from the January 2, 1925 issue of the Altamont Enterprise: “John Dyer Dies of Gas Fumes in Delmar Garage.” His mother Jessie found him behind the wheel of his car in a closed garage dead from carbon monoxide poisoning. He was just 33 years old

What to make of this tragic story of a life cut short? Bethlehem’s local history is part of the story of our national history. Many from Bethlehem served overseas in the military during World War I.  Many others remained behind and supported the war effort on the home front.  What was Bethlehem like 100 years ago?  The Bethlehem Historical Association is exploring questions like these and is looking for your input.  Was one of your relatives a Doughboy serving on the Western Front? Perhaps one of your family was part of the Woman’s Land Army or served with the Red Cross?  Please consider sharing your information. You may contact me at sleath@townofbethlehem.org or contact Karen Beck of the Bethlehem Historical Association, 439-9260, bethhist1965@gmail.com.