If you read this blog, you know when it comes to history, I am easily distracted.  This week it was Box 61 that did the trick. I opened the lid to find inside what is probably the oldest thing in Town Hall - an indenture from 1760.  That's well before there was even a United States, never mind a Town of Bethlehem.  It makes for fascinating reading.

Here's the first few lines as best as I can make out.


This Indenture made and conclused this fourteenth day of January in the fist year of the Raign of our Soveraign Lord George the third of Great Britain france and Ireland King Defender of the faith Between Gerritie Ten Eyck widow and Relect of Coenradt Ten Eyck of the City of Albany in the Provence of New York of the one part and Tobias Ten Eyck of the same place the other Part Witnesseth that the said Gerretie Ten Eyck for and in Consideration of the sum of fourty Pounds Current Money of new York to her hand paid … She the Said Gerrretie Ten Eyck hath bargain and sell Alein Release and Confirm unto the said Tobias Ten Eyck.. forty Morgans of the undivided low or meadow lands In the Patant of the Half Moon in the County of Albany…

There are all kinds of interesting items to explore just in that little piece.

What is an indenture exactly? It is simply a deed, written contract or sealed agreement.  Dictionary.com goes on to point out that the documents have "edges  correspondingly indented as a means of identification."  Ironically, the document here is not indented at all.  It is one giant paragraph.

King George?  Yes that King George of Revolutionary American history.  He reigned in Great Britian from 1760 to 1801 - hence the date of this item being 1760.

And who is Gerritie Ten Eyck beyond a "relect" of her dead husband?  (A relic - a surviving trace of something - or someone as in this case).  A quick hop over to the People of Colonial Albany website reveals she is Gerritje Van Schaick, born in 1687, daughter of Anthony Van Schaick and Maria Vanderpoel.  (By the way, Van Schaick is mentioned in the indenture as having been granted the land since 1672.)

Let me just quote Stefan Bielinski's glimpse into her life.

Gerritje  was born in September 1687. She was the eldest daughter of Albany residents Anthony and Maria VanderpoelVan Schaick. She grew up in a large family in the Albany homes of a wealthy businessman and landholder.
Just past her seventeenth birthday, Gerritje married silversmith Coenradt Ten Eyck at her father's Albany home on September 24, 1704. Seven months later, the first of her ten children was baptized in the Albany Dutch church.

These Ten Eycks lived in the first ward where Coenradt was a prominent silversmith, businessman, and city official. Over the next decades, their fortunes were bolstered by substantial bequests from Gerritje's family - the Van Schaicks. By the late 1740s, they had moved across State Street to a "good house" in the third ward.

Gerritje lost her husband early in 1753. She inherited the use of his property and was a well-known Albany householder for the next decade. Eight of her children married and raised their own families in Albany and its hinterland. Her son, Jacob, became mayor of Albany in 1748. Daughter Anna Margarita married future mayor John Barclay in 1771.

In November 1756, widow Gerritje filed her will. It named her seven living children as beneficiaries of her real and personal estate. The will passed probate in October 1768. Gerritje Van Schaick Ten Eyck had lived in Albany for close to eighty years.

And what about "morgans" of land?  According to a wikipedia article,  morgen is Dutch for morning so a morgen of land is the amount the could be plowed in a morning. Around 8500 square meters - I have no idea what that is in acres.

While I am unsure how this particular document ended up in box 61, there were, and are, lots of Ten Eyck's in Bethlehem.  I am sure there is a family connection! 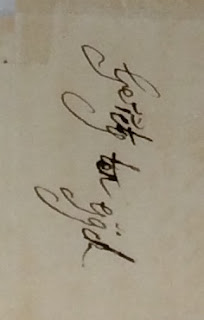 
An update about the word "relect."


I was at a cemetery in Schoharie over the weekend and found a grave stone with the following wording:


So the word is relict which Dictionary.com defines as a remnant or survivor or widow. But I was still close with relic!
Posted by Susan Leath at 8:39 AM