In Honor of Memorial Day: The McCulloch Brothers

In honor of Memorial Day, I give you two veterans buried in Mt. Pleasant Cemetery in South Bethlehem: brothers Stephen and David McCulloch.  Both died in service to their country during the Civil War. 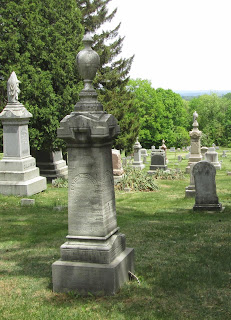 Both have write ups in The Heroes of Albany A Memorial of the Patriot-Martyrs of the City and County of Albany by Rufus Clark.  Hop on over to 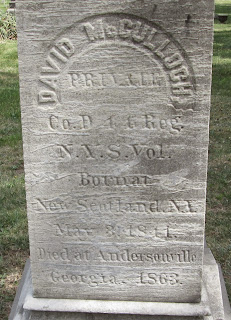 David served with Company D of the 44th New York State Volunteers.  He was captured in action at Mine Run Virginia and died at Andersonville Prison in Georgia.  While the tombstone reads 1863,  New York's Civil War Muster Roll Abstracts says he died March 22, 1864.

Clark writes in Heroes:     He was a kind boy, a dutiful son, and a generous and noble hearted brother....His officers and comrades award to him the highest praise for his uniform good conduct; his cheerfulness under privations and sufferings, and his noble bravery upon the battle-field. 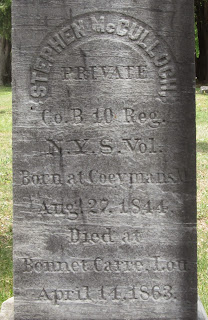 Stephen served with Company B of the 10th Regiment New York State Volunteers. He died August 27, 1863 of disease at Bonnet Carre, Louisiana.

From Heroes:     He was a youth full of enterprise, ambition and intelligence.  He had, too, a very affectionate disposition, and was beloved by all who knew him.  He possesses the same spirit and feelings in regard to the war that fired the soul of his brother.

Clark concludes his section on the McCulloch brothers with words that should resound during this and every Memorial Day.

To the parents who thus gave up two sons for the country, the sympathies of a grateful nation should be cordially extended.