I hope you have seen the August issue of Our Towne Bethlehem.  My latest article is about Bethlehem and Baseball.  Here's a link which hopefully has been updated (it still showed July when I last checked.)

Local author Michael Hallisey also has a great article about Bethlehem baseball with a lot more info than I could provide in Our Towne.

Hallisey mentions Adam Mattice, who was known for his curve ball pitching.   Adam's son John played catcher for the Slingerland Village Wonders in 1918-20.  It just so happens that Adam Mattice's great grand son contacted me last week to ask if I was interested in looking at some old Mattice family documents.  "Of course!" I said.

Adam Mattice (1863-1917) played ball for several teams in Albany and Schoharie counties in the 1880s and 90s including the team Central Bridge and the Slingerland Echos.  He might even have played for the Altamont Stars.  Mattice was known for his curve ball.  An undated newspaper article notes "Although there were pitchers in Albany familiar with the use of the curved ball, Mattice was the first to introduce it in this vicinity, and by its use became practically invincible when opposing the old school of sluggers accustomed only to the swift straight kind."

The Albany Evening Journal of March 23, 1903 recalls an unusual game from 1882 which featured Mattice's pitching for Central Bridge.  It goes on to note that "He is now living in Slingerlands and is a train dispatcher for the Delaware & Hudson railroad, being as expert with the telegraph key as he was years ago with the baseball."  (The unusual part of the game involved a betting scheme gone awry.)

And indeed, the 1900 census offers a glimpse of the Mattice household.  Their home in Slingerlands was dwelling number 69 in the enumeration.  Adam was born in February 1863 and is 37 years old.  He works as a railroad train dispatcher.  His wife Mary was born in October 1865 and is 34.  They have been married for 15 years.  Their children are Blanche (age 14), Dudley (age 11) and John (age 2). All were born in New York State and their parents were born in New York State. All, except John, can read, write and speak in English.  They are home owners with a mortgage.

Many thanks to John Morrill for sharing his family's photos and papers!


*******************
Today is December 8, 2015 and I wanted to add a postscript about Adam Mattice.  I recently found his obituary from the Altamont Enterprise.   It intrigues me that baseball is not mentioned at all.  His career with the Delaware and Hudson spanned 30 years starting as a train dispatcher, clerk in the auditing department and as an assistant in the legal department. He studied law with his father and was admitted to the bar in 1897. He died in 1917 at age 54. 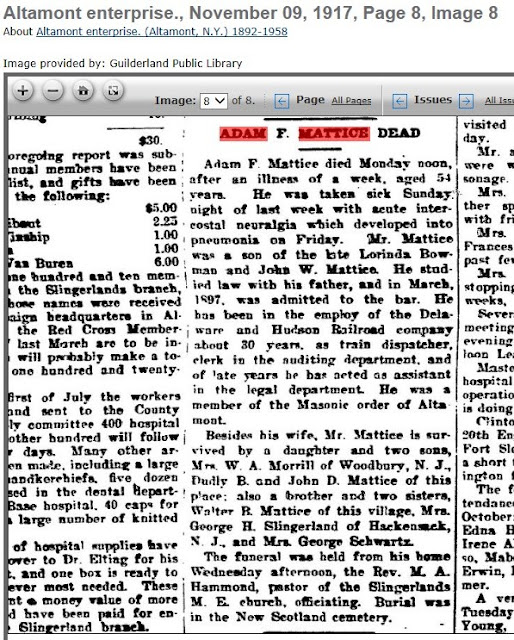